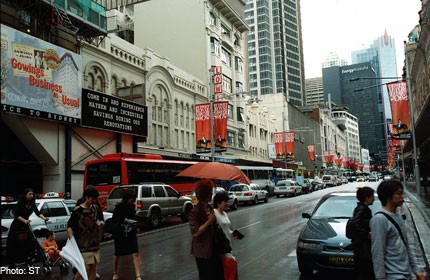 SYDNEY - Australian businesses remain optimistic that conditions will improve over coming months and are boosting plans for investment and hiring, a survey showed on Thursday.

National Australia Bank's quarterly survey of over 900 firms also found that only a third were troubled with the high level of the Australian dollar, while retailers and wholesalers welcomed the downward pressure it put on import costs.

Importantly, firms overall planned to invest more over the next 12 months, holding out the hope that a slowdown in mining spending would not be too much of a drag on the economy.

The survey's index of business conditions over the next 12 months held steady at a solid +24 in the second quarter, while that for investment firmed 3 points to +21.

The measure of current conditions edged up a point to +1, while the employment index rose to 0, from -5. "Low interest rates are helping to strengthen interest sensitive sectors of the economy, particularly residential property," said Alan Oster, chief economist at NAB. "Indeed, property and construction now the most confident going forward." The Reserve Bank of Australia (RBA) has been holding rates at a record low of 2.5 per cent in part to encourage a revival in home building that would help offset a cool down in mining investment.

The impact of low rates showed clearly in the finance, property and business service sectors, along with recreation and personal services, which reported the most positive business conditions, while mining remained very weak.

There was little sign of inflationary pressure in the survey, thanks partly to the high Australian dollar. "Stronger prices growth in construction was more than offset by softer growth in retail and manufacturing, the easing generally coming from lower purchasing cost inflation," noted Oster.

Measures of both retail and input prices were very subdued in the quarter, while labour costs continued to run well below the historical average.