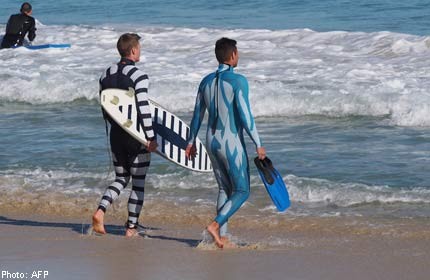 SYDNEY - An Australian research firm Thursday launched what is being touted as the world's first anti-shark wetsuit, using new discoveries about the predators' eyesight to stave off or evade an attack.

Working in conjunction with the University of Western Australia's (UWA) Oceans Institute, entrepreneurs Hamish Jolly and Craig Anderson have developed two lines of wetsuit designed to protect divers and surfers from sharks.

"It's based on new breakthrough science which is all about visionary systems for predatory sharks," Anderson told AFP.

"We've been able to interpret that science and convert that into, basically, materials that create some confusion for sharks' visual systems."

The blue-and-white "Elude" range, designed for divers and snorkellers, uses research about sharks' perceptions of light and colour blindness to essentially "hide you in the water column", Anderson said.

The "Diverter" - mainly for surfers - is based on what sharks perceive as danger signs in nature, with a bold black and white banding patten to imitate an "unpalatable food item", according to UWA researcher Shaun Collin.

"Many animals in biology are repelled by noxious animals - prey that provide a signal that somehow says 'Don't eat me' - and that has been manifest in a striped pattern," said Collin.

It is the culmination of a two-year research project funded by the Western Australia government following an unprecedented spate of shark attacks in the state which claimed five lives in the year to July 2012.

Sharks are common in Australian waters but deadly attacks have previously been rare, with only one of the average 15 incidents a year typically proving fatal.

Experts say the average number of attacks in the country has increased in line with population growth and the popularity of water sports.

Stickers using the Diverter striped pattern are also available for the underside of surfboards and other watercraft.

Testing of the designs using dummies and tiger sharks off Australia's west coast has been successful, with the marine predators gliding past SAMS patterns but savaging traditional black wetsuits.

Further testing will be done off southern Australia and South Africa this Southern Hemisphere summer (December-February).

Anderson said there was "substantial" demand across the world for technologies to repel sharks, and SAMS would soon unveil a partnership with a major global technical swimwear brand.

"Everyone's looking for a solution, everyone's nervous about going in the water around the world now. It's not just Australia, we had a fatality in the Reunion Islands this week ," he said.

Of the wetsuits, he added: "It's safe, it's natural and gives the animals no harm at all."