Australian PM says he is far from 'dead and buried' 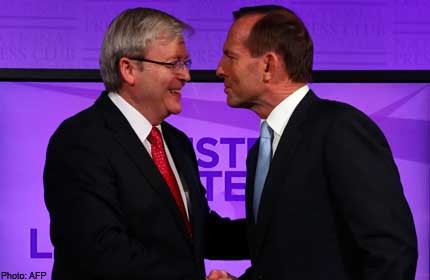 SYDNEY - Embattled Australian Prime Minister Kevin Rudd warned Thursday he was nowhere near being "dead and buried" after a debate in which election rival Tony Abbott asked: "Does this guy ever shut up?"

Labor's Rudd and his conservative opponent went head-to-head in an often fiery televised confrontation on Wednesday evening with Sky News, which hosted the forum, saying Abbott won with 37 audience members voting for him compared to 35 for the prime minister.

The remaining 33 people in the audience were undecided.

While a more confrontational Rudd, who is trailing in opinion polls, managed to breathe new life into his flagging campaign by attacking Abbott's failure to make public his policy costings, his opponent scored the most memorable moment in their second face-off.

When pressed by Rudd on how he would fund his signature paid parental leave policy, Abbott turned to the audience to ask: "Does this guy ever shut up?".

Media seized on the comment as the highlight of the campaign so far.

Rudd, who has a reputation for enjoying the limelight, replied: "We are having a discussion, mate."

Abbott made the most of getting the upper hand in the debate, telling reporters Thursday: "One contest I can never win against Mr Rudd is a talkathon. I just never can.

"I'm not against talk," he said. "My problem with Mr Rudd is that he is all talk and no action, and when he does take action it's invariably action that damages people."

Abbott added: "I will tell the truth about our policies. I will not tell lies about the other side because that is all that Mr Rudd has left in his desperation."

With the campaign for the September 7 election hitting the half-way mark, Rudd used momentum from the debate to give a rousing speech in Geelong, near Melbourne, saying it would be a mistake to write him off.

"But I'll tell you what - I am a fighter, a real fighter. And I will be fighting in every city, every state to make sure the message of what we offer to build a better future for our kids, our communities, our families and our country is heard loud and clear."

Rudd, who was brutally ousted as prime minister by Julia Gillard in a party room coup in 2010 before returning the favour to unseat her in June this year, added that Labor could still win.

"People have written me off before - I have a habit of coming back," he said, adding: "If I put together all the newspaper headlines saying I was dead and buried, they'd have two volumes on the shelf at the library here in Geelong.

"But I'll tell you something, I'm made of sterner stuff than that and we're going to fight, fight, and fight and make sure this Australian Labor government is returned on September 7."

Labor has campaigned on its steerage of the economy during the global financial crisis which kept Australia out of recession. But after six years the centre-left party's popularity is waning.

Abbott has promised to draw down the budget deficit, and offered a "signature" policy on paid parental leave which would give women up to 26 weeks leave on their full wage if they have a baby.

The third, and what is expected to be the final, leaders' debate is scheduled to take place in Sydney next Wednesday.