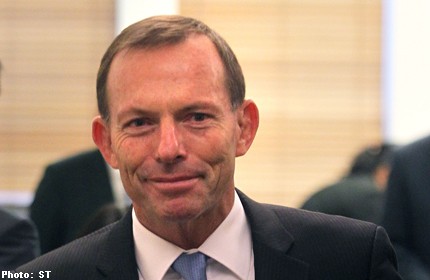 SYDNEY- Australia's opposition leader, accused last year of misogyny in a blistering speech by then-prime minister Julia Gillard, was under fire Tuesday after touting the "sex appeal" of an election candidate.

Tony Abbott, currently the frontrunner to become next prime minister in September 7 polls, made the remark while campaigning with his conservative Liberal Party's candidate in western Sydney, Fiona Scott.

Abbott was asked about similarities between Scott and the woman who formerly held the seat, Jackie Kelly.

"They're young, they're feisty, I think I can probably say have a bit of sex appeal, and they're just very, very connected with the local area," said Abbott.

There was an immediate backlash on social media, where #sexappeal quickly became a trending topic in Australia - the second consecutive day a gaffe from the conservative leader made headlines.

Abbott on Monday mistakenly used the word "suppository" - which refers to a drug delivery system through the rectum or other opening - while contrasting his campaign to that of Labor Prime Minister Kevin Rudd.

"No-one, however smart, however well-educated, however experienced, is the suppository of all wisdom, and I believe that we will be a much better government because we have a very strong team," said Abbott then.

The suppository hashtag was still trending strongly online on Tuesday, with the press declaring Abbott the "butt of jokes" online.

Abbott has a history of gaffes, particularly about women, declaring earlier this year that "women of calibre" should be encouraged to have children as he launched a maternity leave scheme.

Gillard - dumped as leader by the Labor Party in June - listed sexist remarks made by Abbott, including that she "make an honest woman of herself".

She told him: "If he wants to know what misogyny looks like in modern Australia, he needs a mirror."

Abbott is not the first politician to make a "sex appeal" blunder, with US President Barack Obama apologising to California's top prosecutor in April after he called her "by far the best-looking attorney general in the country" at a fundraiser.