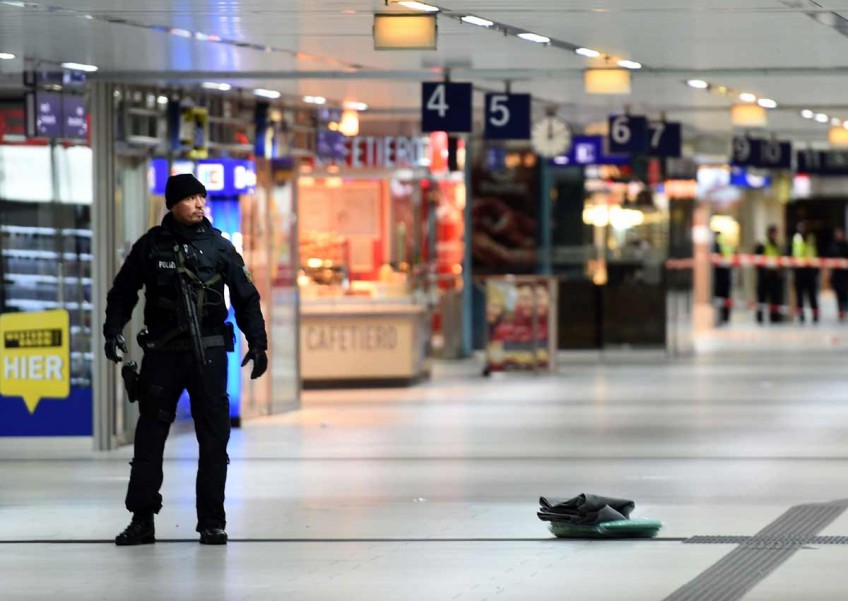 Policemen secure the crime scene after the axe attack on passengers at the main train station on March 9, 2017 in Duesseldorf, Germany.
AFP

German police have arrested an axe-wielding attacker believed to be suffering from mental health issues after he injured seven people at the main train station in Dusseldorf Thursday.

The 36-year-old man is from the former Yugoslavia, according to police, who said he suffered serious injuries when he jumped from a bridge while trying to escape.

"An assailant probably armed with an axe attacked people at random" at about 8.50 pm local time (1950 GMT), city police said in a statement, adding that he "apparently suffers from mental problems".

"Out of the seven injured, three were badly hurt and four were slightly injured," they said.

Due to his injuries from the bridge fall the suspect was not yet able to be interrogated, the German news agency DPA reported.

His reasons for carrying out the attack are unknown.

In the wake of the rampage, large numbers of police including heavily armed police commandos in balaclavas and bullet-proof vests were deployed at the station. Bild newspaper reported that helicopters flew overhead.

"Interruption at the central station in Dusseldorf. We can't say when the trains will start running again," regional police said on Twitter.

Police originally said several attackers were involved, but after determining the man was the sole person responsible and taking him into custody, the station was reopened shortly before midnight Thursday.

"We were on the platform waiting for the train. The train arrived and suddenly someone with an axe came out and started attacking people," an unnamed witness told Bild.

"There was blood everywhere," the witness was quoted as saying.

Peter Altmaier, a close adviser to Angela Merkel, wrote on Twitter: "What happened at the central station in Dusseldorf, our compassion and our thoughts go out to the injured." The city's mayor Thomas Geisel also reached out to victims.

"It's a huge blow for Dusseldorf. Many people are in shock. I'd like to thank the police. My thoughts go out to the victims and their families," he reportedly said.

German authorities have been on alert for terror attacks, especially since an assault claimed by the Islamic State group in December when a hijacked truck ploughed into a Berlin Christmas market, killing 12 people.

According to German security services, there are about 10,000 radical Islamists in the country, of whom 1,600 have suspected links to terror groups.

However, there have been several attacks in Germany recently where the assailants have turned out to simply be psychologically unbalanced.

In July last year, a 17-year-old migrant wielding an axe and a knife went on a rampage on a train in Bavaria, southern Germany, seriously injuring four members of a tourist family from Hong Kong and a passer-by.

That attacker was later found to be mentally unbalanced.

In February, a 35-year-old German national, who according to media was also suffering from psychiatric problems, drove his car into passers-by in Heidelberg, south-west Germany, killing one and injuring two.