PARIS - Cristiano Ronaldo collected his joint-record fifth Ballon d'Or on Thursday (Dec 7) in Paris in the middle of his worst domestic season for Real Madrid, but with a deserved reputation for delivering on the biggest stage of all and when it matters most.

Despite equalling Lionel Messi in being named the world player of the year for a fifth time, he trails the Barcelona forward in the La Liga scoring chart, on a measly two goals to Messi's 13 strikes which have helped Barca lead Real by eight points in the standings after 14 games

Ronaldo has been able to counter criticism for his dire league form by continuing to lead the way in the Champions League, however, topping the scoring chart for a seventh year in a row with nine goals so far this season, also becoming the first player to score in all six group games.

Indeed, he won the award - set up by the magazine France Football in 1956 - for the huge role he played in Real last season becoming the first team to retain the Champions League crown since AC Milan in 1990. 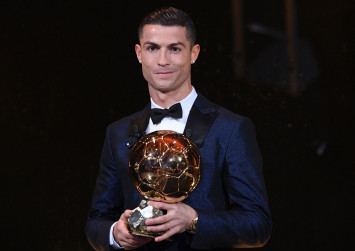 Ronaldo came into his own in the latter stages of the competition, scoring eight goals against Bayern Munich and Atletico Madrid to help put Real in the final in Cardiff, where he netted twice in their 4-1 victory over Juventus.

Real also wrested the LaLiga title back from Barcelona last season, with Ronaldo scoring 25 goals along the way, including the first in their title-clinching 2-0 win at Malaga.

The Portugal star matching Messi in winning the most coveted individual prize in the game five times will reignite the eternal debate over which of the two players is the best in the world or indeed of all time.

It is to Ronaldo's credit that the debate is still raging on after Messi led him with four Ballon d'Or awards to one back in 2012.

As well as having five Ballon d'Or awards each, the pair have the same number of European Golden Shoes and Champions League triumphs (four), while Messi has the edge in league titles with eight to Ronaldo's five (two with Real and three with Manchester United).

The Argentine is the all-time top scorer in LaLiga, although Ronaldo, who joined the Spanish top flight five years after Messi made his debut, has a better goals-to-game ratio.

Ronaldo, meanwhile, is the top scorer in the Champions League on 114 goals, 17 ahead of Messi.

The Argentine's supporters argue Messi is more of a team player than Ronaldo and can point to his 199 assists in all club competitions, although the Portuguese is not far behind with 174.