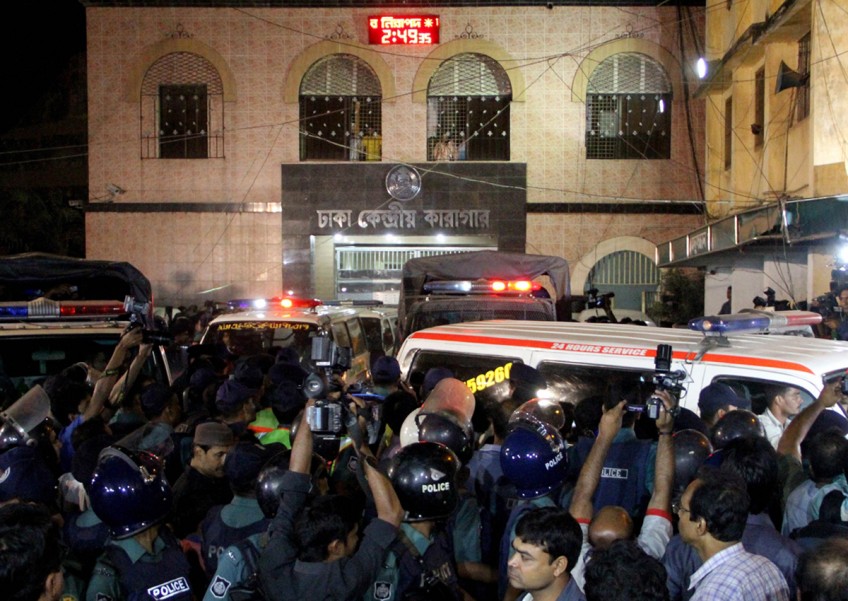 A picture taken early on November 22, 2015 near the Dhaka's central jail shows an ambulance supposed carrying the dead bodies of Bangladeshi Nationalist Party leader Salahuddin Quader Chowdhury and Jamaat-e-Islami Secretary General Ali Ahsan Mohammad Mujahid after they were executed for war crimes committed during the 1971 independence war with Pakistan after their last-ditch pleas for clemency were rejected.
AFP

Two senior Bangladeshi opposition leaders were executed early Sunday for war crimes committed during the 1971 independence war with Pakistan after their last-ditch pleas for clemency were rejected.

Justice Minister Anisul Huq said Ali Ahsan Mohammad Mujahid and Salahuddin Quader Chowdhury had been hanged at Dhaka's Central Jail in a move that was celebrated by supporters of the ruling Awami League.

Hundreds of police had been stationed outside the jail in Dhaka's old quarter where scaffolds had been prepared to execute the pair.

The first sign that the executions had taken place came when four ambulances were driven away from the prison shortly before 1:00am.

The 67-year-old Mujahid was sentenced to death for war crimes such as the killing of the country's top intellectuals. He is the second most senior member of Bangladesh's largest Islamist party, Jamaat-e-Islami.

Chowdhury, 66, was convicted for atrocities such as genocide during the 1971 war when the then East Pakistan split from Islamabad. He is a six-times ex-lawmaker and a top aide to Khaleda Zia, leader of the main opposition Bangladesh Nationalist Party (BNP).

After news of the execution broke, supporters of Prime Minister Sheikh Hasina's Awami League took to the streets to celebrate and also unfurled huge national flags near the prison.

"I've waited for this day for a long 44 years," said Shawan Mahmud, daughter of top musician Altaf Mahmud, who was killed by the notorious Al Badr militia that Mujahid was convicted of leading during the war.

"We had to endure years of pains and shame as these war criminals would taunt us. But now justice has finally been delivered," she told AFP.

Huq said the two had sought clemency on Saturday from President Abdul Hamid after exhausting all legal appeals to avoid execution but their pleas were turned down.

Sons of the two convicts, however, questioned whether their fathers had in fact sought mercy, saying they did not believe the government's statements.

"My father said he did not seek any mercy. He has always said he's innocent. He said they are killing him because they could not beat him in elections," Chowdhury's son Humam Qauder Chowdhury told AFP after meeting his father for the last time just a couple of hours before his execution.

The pair were among more than a dozen leaders of the opposition alliance convicted by a tribunal set up by the secular government in 2010.

The convictions triggered Bangladesh's deadliest violence since independence, with some 500 people killed, mainly in clashes between Jamaat-e-Islami activists and police.

There are fears the executions could spark fresh unrest in the Muslim-majority nation, which is reeling from a string of killings of secular bloggers as well as the murders of two foreigners in recent months.

The opposition says the tribunals are designed to settle scores rather than deliver justice but the government insists that the trials have been fair and were needed to address the country's bloody history.

Hasina, whose father Sheikh Mujibur Rahman was the leader of the independence movement, says three million people were killed in the nine-month conflict, many butchered by pro-Pakistan militias.

Independent researchers however say the overall death toll was much lower.