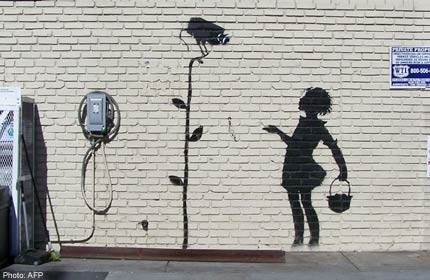 This undated image courtesy of Julien's Auctions shows the mural "Flower Girl" by British artist Banksy at a gas station in Los Angeles. The mural, a 9x8 foot (2.7 x 2.4 meter) mural on brick, will headline Julien's Auctions "Street Art" auction in December 2013 . The owner of the gas station, before selling the property, decided to have a 9x8 foot section of the wall cut out and removed to bring it to auction.

LONDON, England - The auction of works by Banksy, the world's most infamous graffiti artist, has angered residents of looted London neighbourhoods and "embarrassed" the artist as the sale of street art becomes a lucrative enterprise.

Hollywood A-listers Angelina Jolie and Brad Pitt are fans of the British artist's stencilled designs, known for their irreverent humour and political activism.

One of his most famous works is painted on the Israeli separation wall and depicts a young girl flying away while clasping a bunch of balloons.

Other notable designs by the Bristol-born artist include a demonstrator throwing a bouquet of flowers, instead of a rock, and a stencil of two British policemen wrapped in a passionate embrace.

The Sincura group, a VIP concierge company which promises to "acquire access to the inaccessible" sold a Banksy stencil in June.

"Slave Labour", which depicts a kneeling child working away at a sewing machine making small British flags, appeared in 2012 on the side of a shop in the London district of Wood Green, the scene of serious disorder during the 2011 riots.

The sale enraged local residents, who said they felt "robbed."

"We feel very strongly that this piece was given freely by Banksy to our area, it belongs to the community and it should be returned to Wood Green," local councillor Alan Strickland told AFP.

'It never was about money'

At the end of July, a similar operation saw another painting disappear from Tottenham, another north London district which had been at the centre of the 2011 riots.

The work "No Ball Games", which shows two children preparing to throw a sign prohibiting ball games, will be "renovated" before being sold in 2014, according to the Sincura group.

A third sale, "Flower Girl", is planned for December 5 in Beverly Hills.

This stencil depicts a small girl with a basket in front of a huge plant in which the flower has been replaced by a surveillance camera with a rat's tail, a recurring motif in Banksy's work.

As with the other sales, proceeds from the painting, which originally appeared on the wall of a service station in Hollywood, will go to the building owner, not the artist.

For Richard Howard-Griffin, director of Street Art London, which organises guided graffiti tours of the British capital, these auctions bring to light the "naked profiteering and untrammelled capitalism which illustrates the greed inherent within human nature".

The reclusive Banksy, whose real name is reported to be Robin Gunningham, did not respond to AFP requests for an interview, but his views on the subject are expressed in Oscar-nominated documentary "Exit through the Gift Shop".

"So those famous auction houses have all of a sudden started selling street art, everything was a bit crazy, suddenly it all became about the money, but it never was about the money", he said.

On his website (www.banksy.co.uk), Banksy invites people to freely download photos of his graffiti works and quotes Henri Matisse to convey his thoughts on the sales.

"I was very embarrassed when my canvases began to fetch high prices, I saw myself condemned to a future of painting nothing but masterpieces," he writes.

Another illustration of the perverse effects of his popularity arose recently in Los Angeles.

A disused water tank, on which Banksy in February 2011 wrote "this looks like an elephant", and in which lived a homeless man, was immediately sold off.

Without shelter, the unfortunate occupant received a sum of money from Banksy, allowing him to stay for one year.

"There's no better guy than Banksy," the man told Britain's Independent newspaper. "He helped me more than anyone in my life."

In a sign of Banksy's marketability in a world he claims to despise, the story of this man is now being told in a theatre show called "Banksy: The room in the elephant", which is currently playing in Edinburgh.