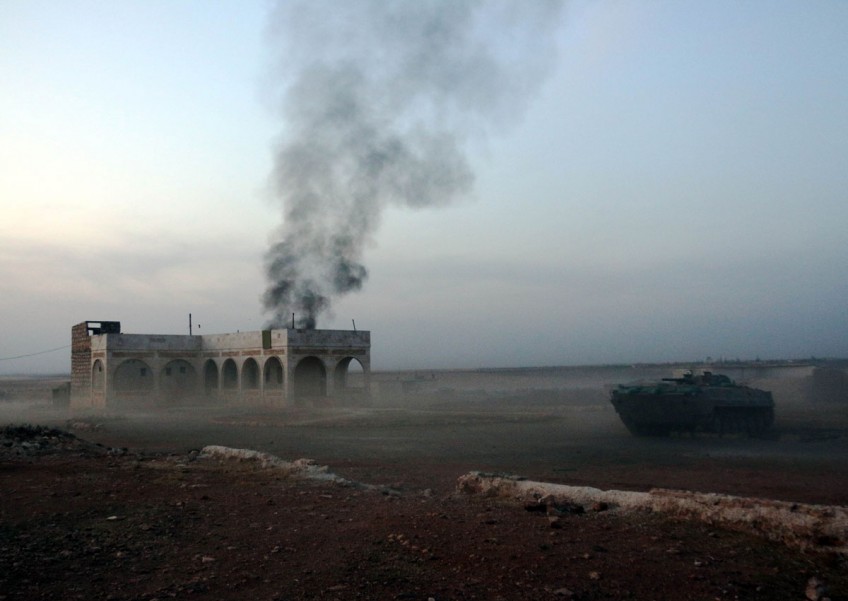 Nearly three weeks of air strikes have given Bashar al-Assad's regime and his forces a morale boost, analysts say, but so far the effect on the ground has been negligible.

Still, military sources in Damascus say it will take time for the regime to regain ground and are confident of a turnaround.

A longtime ally of Damascus, Russia escalated its support in late September with an air campaign aimed at bolstering regime positions and backing ground operations by Syrian government troops. It has so far carried out more than 500 air strikes.

Joined by fighters from Lebanon's Shiite Hezbollah movement and Iran's elite Quds force, Syria's army has in the last two weeks launched ground assaults in Aleppo in the north, Hama and Homs in the centre, Latakia along the coast and outside Damascus.

The army has made small gains, seizing some villages in Aleppo, Homs and Hama.

But it has yet to regain control over any key sites or supply routes and a major advance launched in Aleppo on Saturday - and boosted by a reported 2,000 Iranian and Iran-backed fighters - seems to have stalled.

"The air support from Russia by itself is not enough to tip the balance in the favour of the regime, especially since there are so many gaps and weak spots in the Syrian army's ground forces," said Yezid Sayigh at the Carnegie Middle East Centre.

The Syrian army's 300,000-strong pre-war force has been roughly halved by deaths, defections and widespread draft-dodging.

According to a recent toll by the Syrian Observatory for Human Rights, a Britain-based monitor, more than 52,000 regime soldiers have been killed since Syria's conflict began in 2011.

"The Syrian air force had used up nearly all of its ammunition and missiles provided by Russia and was left only with locally-made barrel bombs," a regional military expert previously based in Syria said, speaking on condition of anonymity.

For the moment, Russia's intervention has certainly "restored the morale" of Syria's army, but not done much else, Sayigh said.

Since it began strikes on September 30, Moscow has said it is targeting the Islamic State jihadist group and other "terrorists," while rebels and their international backers accuse Russia of striking non-IS groups in a bid to prop up Assad.

Although Russia's involvement was received with much fanfare, "changes on the ground are rather minimal," said Karim Bitar of the Paris-based Institute for International and Strategic Relations.

"Militarily, the Russians are mostly trying to preserve the status quo and to make sure territories currently controlled by the Syrian regime remain under Assad's firm hand," Bitar said.

After more than four years of fighting that has left more than 250,000 dead, Assad's regime is in control of about 30 per cent of Syrian territory.

"At this stage, the Russians are not willing to reconquer territory that has already been lost" by stepping up the intervention with ground troops or even more intense strikes, Bitar said.

One of the priority areas is Latakia province, the coastal heartland of Assad's regime and his Alawite sect, an offshoot of Shiite Islam.

Latakia has come under attack from a powerful coalition of opposition forces, including Al-Qaeda affiliate Al-Nusra Front, seeking to advance from the strategic Sahl al-Ghab plain at the intersection of Hama, Latakia and Idlib provinces.

For Damascus, keeping Latakia safe means securing Sahl al-Ghab and the nearby supply routes that link the coast to the capital, Sayigh told AFP.

The fighting for the plain and surrounding provinces has been intense, especially as the rebels are entrenched and well-armed - in some cases with US-made TOW missiles provided by Washington to moderate fighters.

"Regime forces suffered heavy losses in manpower and materiel in the face of heavy rebel resistance," Chris Kozak of the Washington-based Institute for the Study of War wrote in an analysis of recent fighting.

"The Syrian regime has not gained much terrain in the first week of its large-scale ground offensive against rebel forces, despite support from intensified Russian airstrikes and hundreds of Iranian proxy reinforcements," Kozak said.

The offensives could even backfire, he said, noting that "heavy casualties may leave pro-regime forces vulnerable to a counter-attack by Syrian rebels." Still, others say it is too soon to discount the ongoing offensives.

A Syrian military source, speaking on condition of anonymity, said the regime and its allies are prepared for a drawn-out fight.

"The ongoing operation in Hama province, for example, will need 90 days to achieve significant gains," he said.

"Just over two weeks have passed (since Russia's intervention began), and the Syrian army is facing the full force of the armed factions, so the slow progress of the operations is logical in this initial phase," Sukkarieh said.

"We must wait until the fighting groups get weaker to talk about speedier progress."