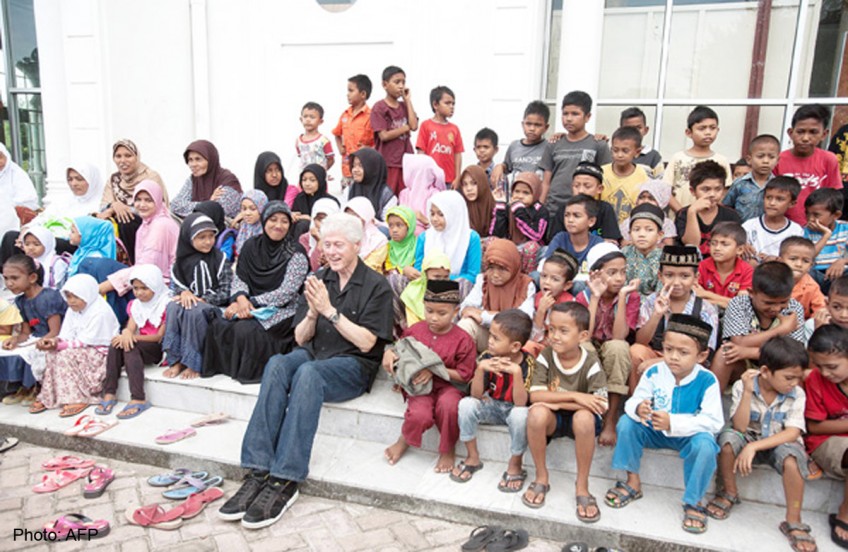 Former US president Bill Clinton visited Aceh on Saturday to see for himself the latest level of development in the province, which was hit by the Indian Ocean tsunami on Dec. 26, 2004.

Clinton has visited Aceh several times in the past. The founder of the Clinton Foundation was at one time the United Nation's special envoy for tsunami relief, who raised money for tsunami victims under the administration of former president George W. Bush.

Clinton Foundation spokeswoman Arielle Beer said the visit was a part of a tour to several Asian countries. Prior to his arrival in Aceh, Clinton had visited India and Vietnam.

"He wants to see the level of recovery and development that has been achieved during the post-tsunami rehabilitation and reconstruction process," Beer said in a statement.

The former president headed first to Lambung village in Meuraxa district, Banda Aceh, which was razed by the tsunami. In the village, he visited the remains of a two-story house that survived the catastrophe. The ruined building now serves as a historic site and a memorial to those affected by the natural disaster.

Clinton was greeted in Lambung by Aceh Governor Zaini Abdulah and Nanggroe Aceh customary leader Malik Mahmud Al Haytar. During his tour, Clinton was also accompanied by the head of the Presidential Working Unit for the Supervision and Management of Development (UKP4), Kuntoro Mangkusubroto.

"We have come here with [university] students and activists who want to learn about the disaster," Clinton told Zaini as quoted by tempo.co.

He also visited the so-called Escape Building, erected as a shelter for local residents in case of another tsunami.

"This disaster united the international community and non-governmental organisations in cooperation to help the reconstruction of Aceh," he said.

After leaving Lambung, the entourage visited the electrical generator ship that was washed inland and became stranded in Punge Blang Cut village, and a fishing village in Lho Seudu in Aceh Besar regency.

During Clinton's visit, a number of students from Ar-Raniry State Islamic University in Banda Aceh staged a demonstration at the Sultan Iskandar Muda traffic circle in Blangbintang, Aceh Besar, to protest the US' stance toward Israel regarding the latter's ground and air attacks in the Gaza Strip.

"To date, the United Nations has not imposed a single sanction against Israel since it began firing missiles into Gaza," Khadafi Syah, spokesman for the organisation, Solidarity for Palestine, said during the rally.

The protest almost turned violent when the police tried to disperse the demonstrators.