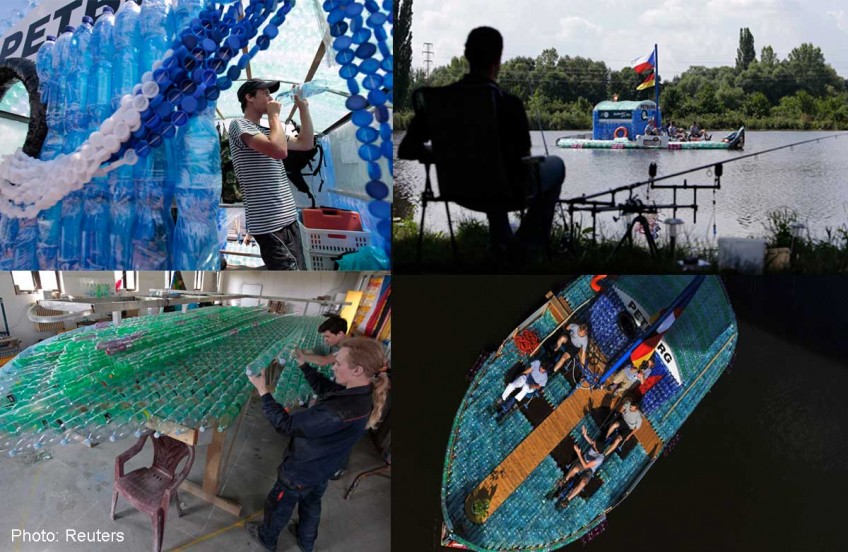 A group of Czech adventurers have built a pedal boat out of plastic bottles and are taking it on an 850km journey to Germany.

Mr Kara, a student, and Mr Bures, a car mechanic, both 22, built the 10m-long boat from 5,000 plastic bottles strapped to a wooden frame.

The four men plan to pedal from the Czech town of Nymburk down the river Elbe to Hamburg, to draw attention to increasing plastic pollution in Europe.

Mr Kara said in Czech: "We started our float on Saturday with a great audience around."

Their boat is called the Petburg, after PET bottles used in its construction, reported Reuters.

It is powered by a 5 horsepower engine and a propeller that is attached to bike pedals.

To keep the vessel buoyant, the bottles have been filled with dry ice.

It took them eight months to build the Petburg, Mr Kara said. And now there will be plenty of time to take in the scenery along the way.

He told Czech station Radio Praha: "Our floating speed is like 3 to 3.5 kmh and anyone can overtake us just walking on the bank.

We'll have a lot of free time. We can spend a month, two months, you know, the whole summer."

The group plans to recycle the boat after their journey.