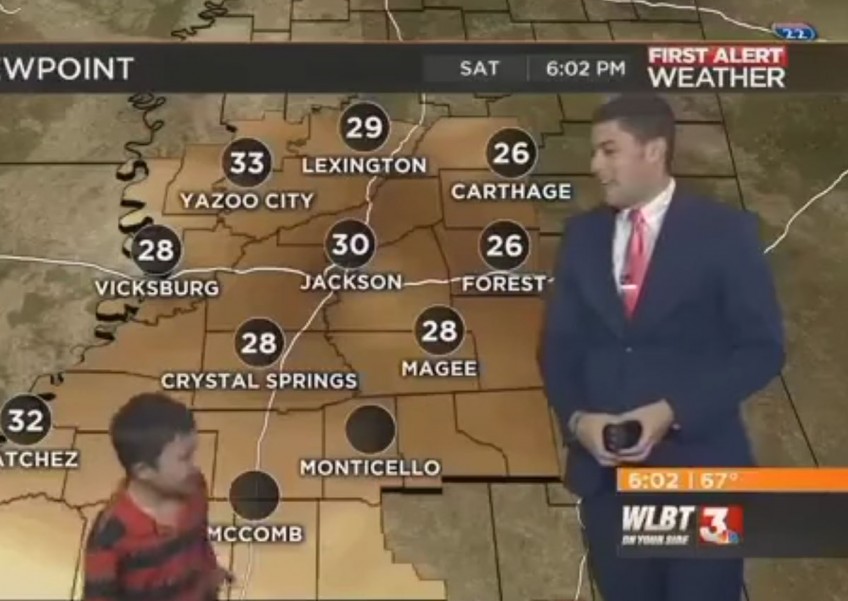 Patrick Ellis, meteorologist for Jackson, Mississippi, was just trying to get through the evening news when a pint-sized surprise guest ran onto the set and promptly wreaked hilarious havoc.

"I don't know what's going on," Houston, the weather-forecast crasher, says by way of opening his unplanned new segment. "Are you sure? Are you really sure?"

Despite Ellis's clear confusion, the meteorologist was a good sport and asked if Houston wanted to give the weather report. That's when Houston treated the Mississippi area to a prediction of "farts everywhere." Classic.

Afterwards, Ellis took to social media to share his reaction and experience.

"You can't make this up," Ellis also says in another tweet.

Due to the video's popularity, the team at WLBT 3 decided to post a follow-up video to Ellis's Facebook page to explain exactly what-and how-it had happened.

It turns out Houston is the son of a lawyer who's part of a call-in show that airs after the evening news. The lawyers and Houston were waiting for the news to wrap up in the break room, and Houston decided to go on an adventure.

Read also: TV meteorologist given sweater to wear on-air after complaints about her dress

"He busts into the studio," Ellis says. At first, everyone thought he was just there to watch the news up close.

"Then all of a sudden, he leans in and he got a head start to run to the wall," Ellis continues. Though it wasn't an easy path from the door to the actual set, but somehow Houston manoeuvred through all of the wires and cables to make it on screen.

"And the rest is history about what happened," Ellis says. "Now I feel like there's a #FartsandToots."

We hope there is. Houston, you've started a movement.