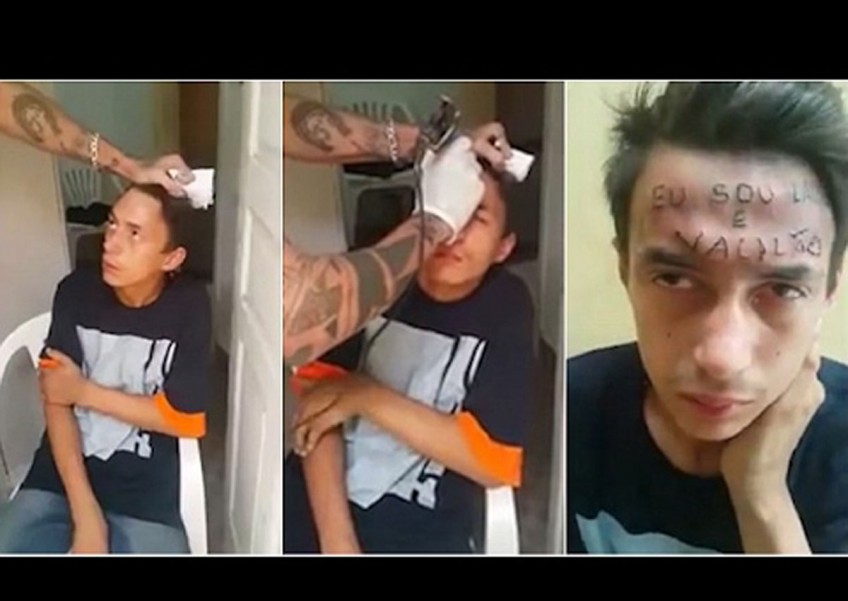 A 17-year-old teenager from Brazil got his forehead tatttoed for allegedly stealing a bicycle.

The man who decided he should mete out the punishment was tattoo artist Maycon Wesley.

The unnamed teenager had allegedly a stolen a bicycle from a man with one leg before he was caught by Wesley who sat him down on a chair and tattooed across his forehead the words "Eu sou ladrão e vacilão", which translates into "I am a thief and a loser" in Portugese.

In the video of the incident, Wesley can be heard laughing both during and after the tattooing process, asking the teen whether he liked his new tattoo after the inking was completed.

Another man's voice can also be heard speaking and laughing in the background.

The voice was later identified belonging to a man named Ronildo Moreira de Araujo, who is Wesley's friend.

During an interview with local newspaper Folha de S.Paolo, the teenager revealed that he had begged his captors to break his arms and legs, or tattoo on his arms instead of his forehead but his pleas were left unfulfilled.

He also admitted to being "very drunk" during the incident, but denied ever trying to steal the bike, stating that he had merely touched it.

"I put my hand on the bike, but it was not stealing. I did not even know what I was doing," the teenager told the local newspaper.

According to the same newspaper, the teenager is a drug abuser, and also suffers from mental disorders.

His family has spent a considerable amount of money in hopes of helping him in his recovery, with the teenager having gone through two institutions for treatment so far.

A crowdfunding initiative was set up ever since news of the teenager's plight attracted attention on social media.

The campaign has managed to collect over S$8,000 to help with the tattoo removal, as well as the various other types of treatments the teenager is undergoing.

Both the tattoo artist and his friend have since been arrested on suspicion of torture on Saturday (June 10).