Britain calls on Hong Kong protesters to 'end the violence'

The level of violence has escalated in Hong Kong since protests broke out in June.

Britain has called on anti-government protesters in Hong Kong to "end the violence", while also asking police to "be proportionate" in their handling of demonstrators.

It also noted that the nature of the protests had changed and stressed that the violence of a "hard-core minority cannot be condoned".

London's stance was spelt out in its latest six-monthly parliamentary report on Hong Kong, released on Thursday, which also called on the city's leader, Chief Executive Carrie Lam Cheng Yuet-ngor, to look ahead to "the path towards de-escalation and political resolution" to break the impasse in its former colony, which has been rocked by worsening protests for almost five months.

In a foreword to the 19-page report, British Foreign Secretary Dominic Raab wrote: "Protesters must end the violence. The police response must be proportionate in their handling of protesters and safeguard the right to peaceful protests. And there must be a meaningful dialogue between all parties."

Although the report covers the six-month period up to June 30, Raab made reference to subsequent events in his comments and noted the nature of the protests had changed over the months, "not only in terms of scale and scope, but also in terms of approach".

He said: "Protesters have vandalised property and tried to shut down banks, metro stations and the airport. A police officer was injured by a knife, and petrol bombs have been thrown at police stations and other targets." 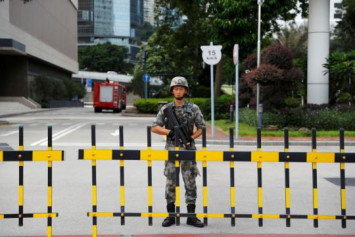 Raab wrote that "the UK has always been clear that the violence of a hard-core minority cannot be condoned," as he also expressed "serious concerns" about the alleged mistreatment of protesters by Hong Kong police.

Almost one-fourth of the report details the course of the social unrest that was triggered by the government's proposed extradition bill to plug loopholes in fugitive transfer laws.

It includes the case at the centre of the crisis, that of Hongkonger Chan Tong-kai, wanted in Taiwan for the murder of his girlfriend, the Hong Kong government's bid to speed up the bill's passage in the legislature by bypassing the bills committee stage, and Lam's suspension of the bill after two million people took to the streets in June in protest.

The now-withdrawn bill would have allowed fugitive transfers with jurisdictions Hong Kong does not have an extradition agreement with, including mainland China and Taiwan.

The movement has also evolved, with the scope of protesters' demands growing to include calls for universal suffrage and even the disbanding of the police force.

Beijing has labelled the upheaval as having "obvious characteristics of a colour revolution", supported by "foreign forces", referring to Western countries.

The British report stressed that "we condemn violence, but support the right to peaceful and lawful protest", and "the right for people to stand up for their freedoms, as guaranteed under the Joint Declaration".

The Sino-British Joint Declaration, signed in 1984 between London and Beijing, set out the terms of Hong Kong's return to Chinese sovereignty in 1997.

Chinese officials have referred to it as an "historic document" that had "completed its mission", but the report reiterated London's stance that it remained a legally binding treaty. 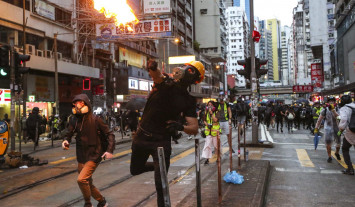 "It is unacceptable to suggest that it is no longer valid. As a co-signatory, the UK is committed to monitoring its implementation closely, and we have made this clear to the Chinese government on many occasions," it said.

A Hong Kong government spokesman said in response to the report that violent and illegal incidents in the city caused damage to district and community facilities, as well as injury to members of the public.

In response, the police have been exercising restraint and carrying out enforcement actions in strict accordance with the law, he said.

The spokesman also added that the government has launched a diversified dialogue platform and will invite community leaders and experts to conduct an in-depth examination of the social conflicts in Hong Kong.

The spokesman reiterated that foreign governments should not interfere in any form in the internal affairs of Hong Kong.

The report also highlighted the trial of the Occupy Central leaders in April, saying: "It would be deeply concerning if the outcome for these individuals was to deter the people of Hong Kong from participating in peaceful and lawful protest in the future."

It also touched on pro-independence activists Ray Wong Toi-yeung and Alan Li Tung-sing being granted asylum in Germany in May, after the duo fled Hong Kong in November 2017 ahead of their trials for their roles in the 2016 Mong Kok riot.