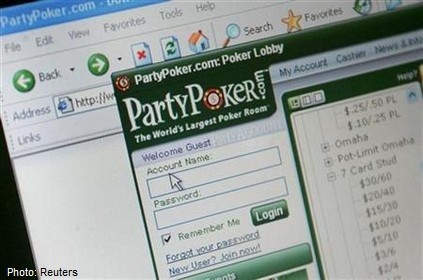 A computer screen displays an online gambling website, in this file photo from October 2, 2006.

LONDON - Online betting companies based in offshore havens to sidestep Britain's gambling taxes will be hit with a new levy that could cost the industry 300 million pounds (S$594 million) under rules unveiled on Friday.

The British government is to impose a 15 per cent tax rate on operators in the 2 billion pound remote gambling market and the rules state that from December 2014 gambling must be taxed according to where customers are based rather than where the online operator is registered.

"It is unacceptable that gambling companies can avoid UK taxes by moving offshore, and the government is taking decisive action to ensure this can no longer happen," Economic Secretary to the Treasury Sajid Javid said.

"These reforms will ensure that remote gambling operators who have UK customers make a fair contribution to the public finances." The shift will affect some of the industry's largest players. Ladbrokes, Bwin.party, William Hill and Betfair all have online operations based in Gibraltar, where taxes are levied at 1 per cent and capped at 425,000 pounds.

Shares in the companies did not move significantly on the news.

The proposed 15 per cent rate, which the government said will be confirmed in its Budget statement next March, would mean that offshore operators are taxed at the same level as domestic internet betting companies.

The government estimates that the new rules would bring in 300 million pounds a year in additional tax revenue.

Plans to bring offshore gaming companies under the British tax system were outlined in the government's 2012 Budget, but the industry had been waiting for the detail - most crucially the rate at which they will be taxed.

William Hill, which has the largest share of the UK's remote gambling market, has previously suggested that it could challenge the changes on the grounds that they breach European Union competition law.