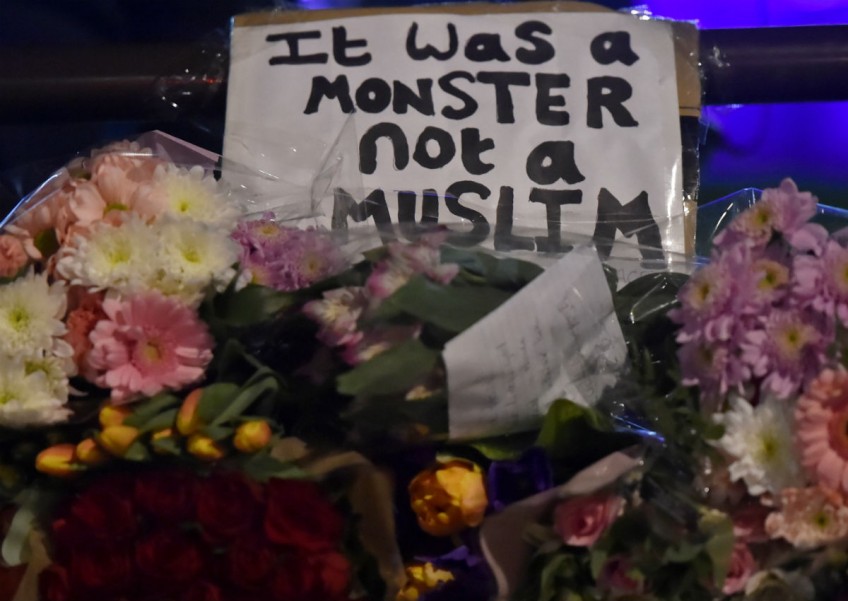 London police on Thursday identified a British man as responsible for killing four people in a rampage outside parliament, as hundreds gathered for a candlelit vigil in the capital.

The Islamic State group claimed the assailant behind the deadliest attack on British soil in 12 years was one of its "soldiers" acting on a call to target countries in the US-led coalition fighting the jihadists.

Police named him as Khalid Masood, 52, and said he had numerous convictions for violent offences but none terrorism-related.

"(He) was not the subject of any investigations and there was no prior intelligence about his intent to mount a terrorist attack." Hundreds of people gathered in Trafalgar Square in central London for a vigil late Thursday led by Mayor Sadiq Khan who said "Londoners will never be cowed by terrorism".

The crowds brought messages of defiance, flags and flowers to the heavily-policed square and offered their condolences to officers who lost a colleague in the attack.

Naveed Mirza, a Muslim student, said he had received "overwhelming" support since the attack described by police as "Islamist-related terrorism".

"We have come to say how, as Muslims, we unequivocally condemn all the violent actions that took place yesterday," he told AFP.

Police said five men and three women aged 21 to 58 were arrested in overnight raids in London and the central city of Birmingham were being investigated "on suspicion of preparation of terrorist acts".

Masood, reportedly a married father-of-three, rented the car used in the rampage in a town outside Birmingham and according to the BBC told the rental company that he was a teacher.

A spokeswoman for Britain's education ministry told AFP Masood was not a qualified teacher and had therefore not taught in any state schools.

He was described as "a nice guy" by Iwona Romek, a former neighbour who spoke to the Birmingham Mail.

"He had a wife, a young Asian woman and a small child who went to school," she said.

First IS claim of British attack

The IS group said it was responsible, according to the Amaq propaganda agency, its first claim of an attack on British soil.

The latest attack had echoes of the atrocities in Nice and Berlin when trucks ploughed into crowds of people, killing 86 people in the French Riviera city in July and 12 at a market in the German capital just days before Christmas.

The assault on Westminster was the deadliest in Britain since four suicide bombers killed 52 people on the city's transport system in July 2005.

A defiant Prime Minister Theresa May had told the reopened parliament that Britain would not be cowed.

"Our resolve will never waver in the face of terrorism," May told a packed House of Commons, which stood for a minute's silence in remembrance of the victims.

Just hours after she spoke, Belgian police arrested a man as he tried to drive into a crowd at high speed in a shopping area in the port city of Antwerp.

That was the third incident in a week in Europe after London and a weekend attack at Paris's Orly airport, and came a day after the first anniversary of the Brussels suicide bombings that killed 32 people and were also claimed by IS.

In his broad daylight attack, Masood mowed down pedestrians with a car along Westminster Bridge - a busy traffic route and popular tourist spot with views of parliament and the Big Ben clock tower.

He then rammed the railings outside parliament and jumped out of the car, fatally stabbing 48-year-old unarmed police officer Keith Palmer before being shot dead.

Britain's defence ministry would not confirm media reports that a bodyguard of Minister Michael Fallon shot the attacker.

A crowdfunding page set up by the police force union for Palmer's family had collected more than £300,000 (S$524,601) by Thursday evening.

The other victims were a 43-year-old British woman, Aysha Frade. Media reports said she was on her way to pick up her two daughters, aged seven and nine, from school.

An American in his 50s, who President Donald Trump named as Kurt Cochran and called a "great American", was another victim, while a 75-year-old man who died of his injuries on Thursday evening.

French school children and foreign tourists were among 29 people treated in hospital.

Britain's last terror attack was the 2016 assassination of MP Jo Cox by a pro-Nazi sympathiser shortly before the historic but deeply divisive June vote to leave the EU.