Britain to reopen embassy in Yemen after 12-day shutdown 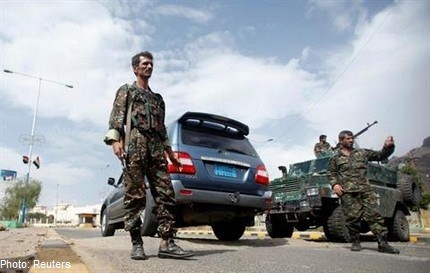 Police troopers man a checkpoint near the British embassy in Sanaa August 3, 2013

SANAA, YEMEN - The British Embassy in the Yemeni capital of Sanaa will reopen on Sunday after being closed for 12 days because of security concerns.

The Foreign Office said on Aug 6 it had withdrawn all staff from the embassy due to a high threat of kidnapping.

Yemen, one of the poorest Arab countries, is the base for Al-Qaeda in the Arabian Peninsula (AQAP), one of the most active branches of the network founded by Osama bin Laden, and militants have launched attacks from there against the West.

Washington also evacuated diplomatic personnel from Yemen on Aug 6 because of a terrorism threat. France and Norway closed their embassies in Sanaa as well.

The move followed the unprecedented closure of US diplomatic missions across the Middle East and North Africa early this month after a warning of a possible militant attack in the region. It reopened them a few days later except for the embassy in Sanaa.