MANCHESTER, Britain - Britain's MI5 intelligence service launched an internal inquiry on Monday (May 29) into whether vital clues were missed in the run-up to the Manchester suicide bombing, as police arrested another man in connection with the attack.

The developments come a week after 22-year-old Salman Abedi, a British-born university dropout of Libyan origin, detonated his device outside a pop concert by teen idol Ariana Grande, killing 22 people, including six children under the age of 18.

A 23-year-old man was arrested in the southern coastal town of Shoreham-by-Sea, more than 400km from Manchester, on Monday over the attack claimed by the Islamic State in Iraq and Syria (ISIS) group.

That brings the total number of people now detained on UK soil to 14, all of them men, while Abedi's father and brother have been held in Libya where officials said the two brothers were ISIS militants.

MI5 are looking at decisions taken in the case of Abedi, who used to be on a terror watch list but was no longer on it at the time of the attack, and whether warnings about his behaviour were ignored amid mounting criticism of the security services.

"There is a lot of information coming out at the moment about what happened, how this occurred, what people might or might not have known," Home Secretary Amber Rudd told Sky News.

"It is right that MI5 take a look to find out what the facts are," she said, adding: "We shouldn't rush to make any conclusions at this stage."

Two people who knew Abedi made separate calls to an anti-terrorism hotline to warn the police about his extremist views, British media have reported.

The BBC also said that Abedi had taken part in the armed uprising against Libyan dictator Muammar Gaddafi's regime as a teenager during school holidays.

British investigators have released pictures of Abedi taken from CCTV shortly before the attack, which also injured more than 100 people, appealing to the public for help in tracing his movements in the days before.

Abedi could be seen on the night of the massacre, wearing jeans and trainers, a black body-warmer and a baseball cap, with the straps of the backpack believed to contain the bomb visible on his shoulders.

The police statement said one of the last places he went to before the attack at the Manchester Arena venue was a city centre flat, where they believe he may have finished assembling the device.

None of the men arrested have been charged with a crime yet and police have up to 14 days in which to do so under special anti-terrorism laws.

Prime Minister Theresa May on Saturday (May 27) lowered the terror threat level, which had been hiked after Monday's carnage.

Investigators say they have a 1,000-strong team working on the probe and have significant details on Abedi's associates and movements, his finances, and how the explosive was built.

Operation Temperer, which involved the deployment of armed troops on patrol alongside police, will be wound down on Monday night, at the end of the holiday weekend.

May has seen her polling lead against the Labour party's Jeremy Corbyn dwindle as campaigning restarted ahead of a June 8 general election, with her rival accusing her of overseeing a cut in police staff while she was interior minister.

From 2009 to 2016, the number of police officers fell by almost 20,000, or around 14 per cent, according to the independent Institute for Fiscal Studies think tank.

May argues that the government has increased funding for security and intelligence agencies. 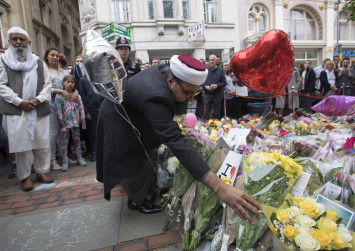 Authorities are currently handling 500 terror-related investigations into 3,000 individuals, with another 20,000 people on the radar posing a "residual risk".

The family of Georgina Bethany Callander, an 18-year-old killed in the bombing, released a tribute on Saturday in which they called on the government to "open its eyes" to prevent further tragedy.

"I wish I could say that Georgina is one of the last to die in this way but unless our government opens its eyes, we know we are only another in a long line of parents on a list that continues to grow," said the family in a statement.

The bombing was the latest in a series of ISIS-claimed attacks in Europe that have coincided with a US-led offensive against the terror group in Syria and Iraq by countries including Britain.