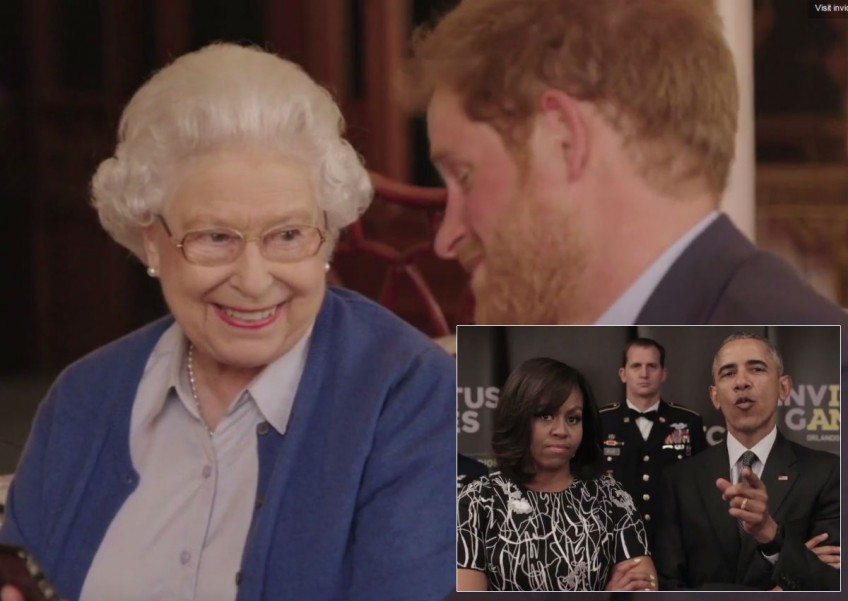 When US President Barack Obama and First Lady Michelle Obama challenged Britain's Prince Harry on social media on Friday, he responded by bringing in a big gun: the Queen.

The Obamas posted a video of themselves on Twitter promoting the Invictus Games, an international sports event for wounded, disabled and sick military personnel and veterans.

"Hey, Prince Harry. Remember when you told us to 'bring it' at the Invictus Games?" Michele Obama playfully challenges.

"Careful what you wish for," the president says, as military officers stand behind the first couple with mock menace on their faces.

"Boom!" one of the guards said, dropping an imitation bomb to add emphasis to the good-natured taunt.

Harry, fifth-in-line to the throne and a patron of the Invictus Games, responded to the US president and his wife in kind.

"Unfortunately for you, @FLOTUS and @POTUS, I wasn't alone when you sent me that video," the prince tweeted to the Obamas at their Twitter handles.

He added a smiley-face emoticon and a video of his own, showing him chatting amiably with his grandmother Queen Elizabeth while they thumbed through an Invictus Games brochure, just as the Obamas' challenge lands in his cellphone.

"Boom?" the Queen says to her grandson after watching the video.

"Really, please!" she adds in amusement.

The Invictus Games, first held in London in September 2014, will take place this year in Orlando, Florida from May 8 to 12.

Prince Harry visited the White House in October, when Obama said the games were a way to make sure people see not only the sacrifices wounded warriors have made, "but also the incredible contributions, strength and courage that they continue to display." During a visit to a Virginia military base the same day, Harry issued a friendly challenge to potential US competitors: "You better bring it, USA."