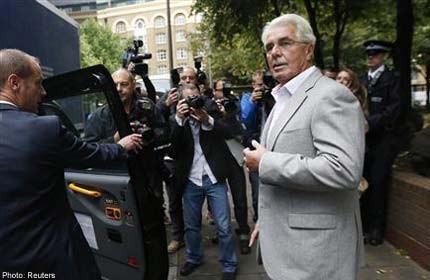 LONDON - Britain's best-known publicist Max Clifford pleaded not guilty on Friday to 11 counts of indecent assault dating back to 1966 that stemmed from a police investigation into child sex crimes by the late TV star Jimmy Savile.

Clifford, whose celebrity clients have included TV music mogul Simon Cowell and US boxer Muhammad Ali, is accused of assaulting seven girls aged 14 to 19 with the alleged offences taking place between 1966 and 1984.

Clifford, 70, was released on bail ahead of a trial which is set to start on March 4, 2014, and last about four weeks.

Clifford was arrested in December as part of a police investigation into historic sexual assault cases, code-named Operation Yewtree, triggered by revelations that Savile was a prolific sex offender over decades.

Police have said the charges against Clifford are unrelated to the accusations against Saville.