British medical students missing, feared to have joined IS 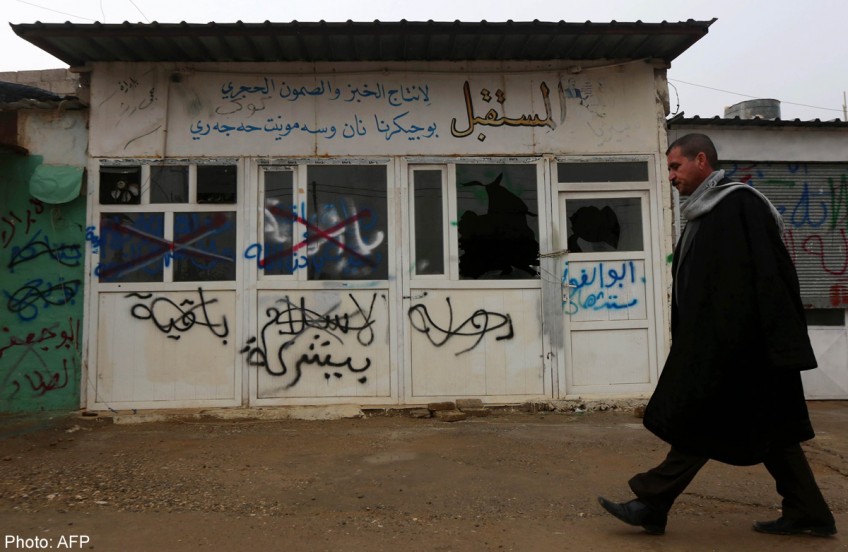 An Iraqi man walks past erased slogans previously sprayed by the Islamic State group fighters on the facade of a bakery in the village of Sinoni in the northern Iraqi district of Sinjar on January 15, 2015.

ISTANBUL - A group of British medical students of Sudanese origin who went missing after travelling to Turkey are feared to have crossed into Syria to join the Islamic State (IS) group as doctors, reports and sources said on Sunday.

The families of the students have travelled to the Turkey-Syria border in a desperate appeal for them to return home before it is too late, a Turkish opposition MP said.

According to reports in Britain's The Guardian newspaper and the BBC, the nine young British medical students flew to Istanbul from the Sudanese capital Khartoum on March 12 and then overland towards Syria.

They have been joined by two other medics from the United States and Canada, also of Sudanese origin, the BBC said.

A Turkish MP from the Republican People's Party (CHP) Mehmet Ali Ediboglu, who represents the Hatay region bordering Syria, wrote on his Facebook page that he was helping the families in their search.

"Eleven doctors - nine British and two Sudanese - came to Turkey a week ago to join ISIS," he said, using another name for IS.

"The families of the young people have been in Turkey to search for them and bring them back," he added.

"Our greatest hope is to save the doctors from ISIS and reunite them with their families." Ediboglu said the families had travelled to the city of Gaziantep, which has been seen as a key gateway for militants travelling to Syria.

He posted photographs of the nine British citizens - five men and four women - some proudly posing in academic dress on graduation day.

"They all have British passports and are of Sudanese origin," he said.

"Their families have travelled after them to stop them from joining IS. We are not able to confirm they have crossed into Syria".

The British Foreign Office meanwhile said: "We are providing consular assistance to their families and we have informed the Turkish police to try and ascertain their whereabouts." Turkey has repeatedly been accused by its Western partners of not doing enough to halt the flow of extremists aiming to join IS jihadists, who have captured swathes of Iraq and Syria.

It was sharply criticised over the failure to stop three British teenage girls who crossed the Turkey-Syria border to join IS in February.

However in the last week it has deported back to Britain a young British woman and three male British teenagers who were suspected of trying to travel to Syria.