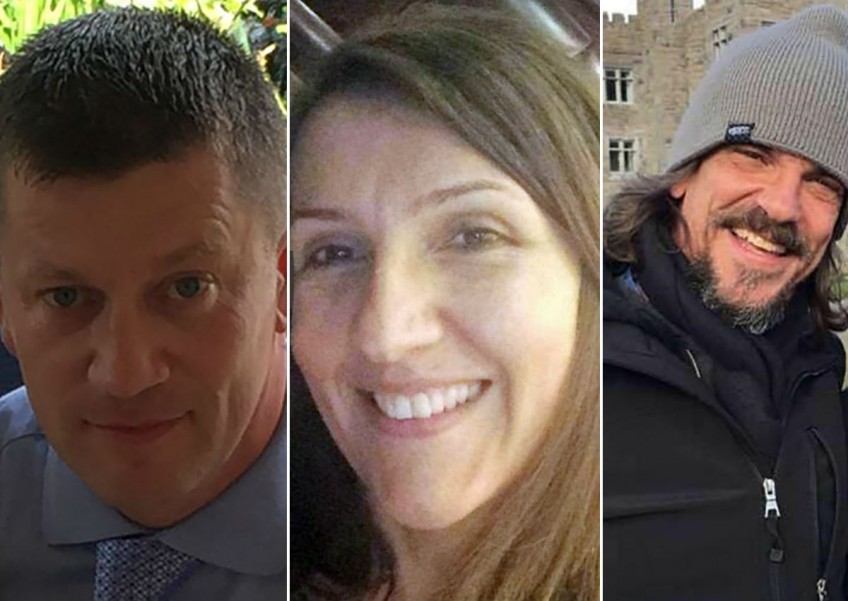 Paramedics load a victim into the back of an ambulance as members of the emergency services work on Westminster Bridge, alongside the Houses of Parliament in central London on March 22, 2017, during an emergency incident.
AFP

Four people were killed in the terror attack outside Britain's parliament: a woman picking up her children from school, a man from Utah, a 75-year-old man, and an unarmed police officer.

Westminster Bridge, where the attacker mowed down pedestrians before stabbing a police officer, is a busy tourist spot with its views of parliament's Big Ben clock tower.

Those injured in the attack included many foreigners.

Here is what we know about the victims so far.

Unarmed police officer Keith Palmer, who was fatally stabbed as he stood guard at an entrance to parliament, has been hailed as a hero.

The 48-year-old husband and father had been a police officer for 15 years and was part of the parliamentary protection force.

Prime Minister Theresa May called him "every inch a hero".

He previously served in the British army alongside James Cleverly, now a Conservative MP, who tweeted: "A lovely man, a friend. I'm heartbroken." As a tribute, Charlton Athletic football club placed a scarf in its red and white colours on Seat 166 of its stadium, which Palmer held as a season ticket holder.

Thousands of people also donated money to Palmer's family via a crowdfunding page set up by the police force union.

Colleagues of Aysha Frade, a mother who was run down and killed as she was on her way to pick up her children, said she was "loved" and would be "deeply missed".

A Spanish diplomatic source confirmed to AFP that Frade was a 43-year-old British national whose mother was Spanish.

Rachel Borland, principal of DLD College London where Frade worked in the administration team, said she was "highly regarded and loved by our students and by her colleagues".

Kurt Cochran from Utah in the United States has been named as the third victim.

US President Donald Trump took to Twitter to pay tribute to "a great American" adding that his "prayers and condolences are with the family and friends".

Clint Payne, Cochran's brother-in-law, explained in a statement that Cochran and his wife Melissa Payne Cochran had been in London to celebrate their 25th wedding anniversary.

"Our family is heartbroken," he said in a statement emailed to AFP.

Cochran's wife is reportedly in hospital, where she is recovering from a broken leg and rib and a cut on her head.

The police said only that a man in his 50s had died.

A 75-year-old man who was injured in the attack died of his wounds on Thursday evening, police said.

"The man had been receiving medical treatment in hospital following the attack and life support was withdrawn this evening," police said in a statement, without giving further details of the victim's background.

Police said 29 of around 40 people wounded were treated in hospital. Seven remained in "critical condition" on Thursday.

Three French pupils on a school trip to London, all aged 15 or 16, were among those hurt, including two who suffered broken bones but were not reported to be in life-threatening condition.

The teenagers are from a high school in Concarneau, in the western Brittany region, and were joined by their families on Wednesday evening. French Foreign Minister Jean-Marc Ayrault arrived in London on Thursday to visit them.

Five South Korean tourists - four women and a man in their 50s and 60s - were also wounded after being knocked to the ground by people fleeing as the assailant mowed down pedestrians, Seoul said.

In an address to parliament on Thursday, May said that among the people admitted to hospital were 12 Britons as well as two Greeks and two Romanians, one German, one Pole, one Irish citizen, one Chinese national, one Italian and one American.

A woman with serious injuries rescued from the River Thames near Westminster Bridge after the attack, as well as her fiance, are believed to be the two Romanians.

Local media in the eastern European country have named them as Andreea Cristea, a 29 year-old architect and Andrei Burnez. Authorities did not confirm the reports.

The injured also included three police officers who were returning from an event recognising their bravery, two of whom remain in serious condition.

Among the injured British nationals were four students from Edge Hill University in Ormskirk in northwest England, who were on an educational visit to the parliament.

Student Travis Frain, 19, was thrown over the bonnet of the car, his mother said.

"He loves politics, that is his ideal trip, going to Parliament. He was probably buzzing with excitement," said Angela Frain.

The teenager's injuries include a fractured leg and arm and he is due to remain in hospital, while three other university students hurt in the attack were released.