LONDON - British Prime Minister Theresa May faced mounting criticism on Friday for not meeting the survivors of a deadly London tower block blaze, ratcheting up the pressure as she tries to strike a deal to stay in power after a botched election gamble.

May promised to hold a public inquiry into a fire that killed at least 17 people when it engulfed a 24-storey social housing block in West London, expressing her sorrow in a televised statement after meeting with the emergency services.

But unlike opposition leader Jeremy Corbyn and London Mayor Sadiq Khan, who was confronted by a young boy asking "How many children died?", May did not meet with residents, prompting criticism from locals, media and within her Conservative party.

"She wanted an entirely controlled situation in which she didn't use her humanity," former cabinet minister Michael Portillo told the BBC. 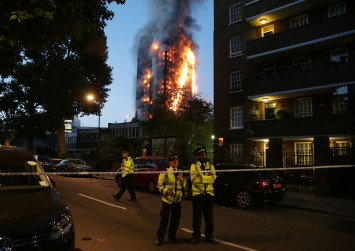 "She should have been there with the residents. You have to be prepared to receive people's emotions, and not be so frightened about people," he said.

When asked on Thursday about why she did not meet residents or visit a local community centre, May said she wanted to visit the scene of the incident to be briefed by the emergency services.

The Sun newspaper said 65 people are now feared dead or missing in the fire. London police expect the death toll to rise further but said it could take months to search the burned-out building and identify the victims.

On Friday, British newspapers heightened their criticism of the government, saying there were a series of unanswered issues including as to whether the cladding used on the building helped the blaze spread.

Local government minister Sajid Javid, responsible for housing policy, defended May for not meeting with those affected by the disaster: "What she wanted to do was to speak to the people working on the ground on the recovery operation, the rescue operation to make sure that they've got everything they want and see how she could help," he told Sky news.

After May failed to win an outright majority in a snap election last week, she is battling to strike a deal with Northern Ireland's Democratic Unionist Party to support her government.