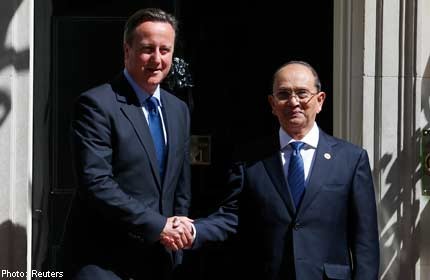 Cameron said he was particularly concerned by violence targeting members of Myanmar's Rohingya Muslim minority in which hundreds of people have been killed.

Thein Sein is visiting London and Paris this week as Myanmar continues its return from international isolation in the wake of reforms brought in by the president since 2011.

Welcoming the Myanmar leader on the red carpet outside his 10 Downing Street office, Cameron said he was "very pleased" to see Thein Sein on his "historic visit".

But Cameron, who last year became the first British prime minister to visit Myanmar, added: "As well as the continuation of your reform process, we are also very keen to see greater action in terms of promoting human rights and dealing with regional conflicts.

"We are particularly concerned about what has happened in Rakhine province and the Rohingya Muslims."

Buddhist-Muslim clashes in the western state of Rakhine last year left about 200 people dead, mostly Rohingya Muslims who are denied citizenship by Myanmar.

Around a dozen protesters gathered outside Downing Street during Thein Sein's visit calling for action to protect the Rohingya.

But Cameron followed the international community's line on the need for economic development in particular to support reform in Myanmar, formerly known as Burma.

"We believe there are many areas for Britain and your country to co-operate together, diplomatically, in terms of trade and investment, the aid and development relationship and also our growing links in terms of our militaries," Cameron said.

The British premier did not specify what the military links were.

Since Thein Sein took the presidency two years ago, the ex-military man has freed hundreds of political prisoners and welcomed democracy champion Aung San Suu Kyi and her political party into parliament.

The European Union has ditched most sanctions except an arms embargo and readmitted Myanmar to its trade preference scheme.

The United States has also lifted most embargoes and foreign companies are now eager to enter the resource-rich nation, with its perceived frontier market of some 60 million potential consumers.