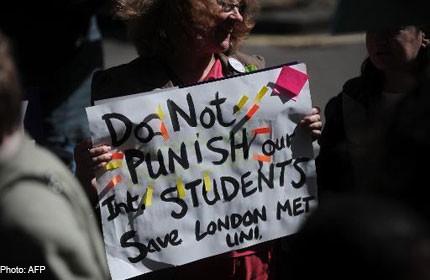 A protester holds a placard as she takes part in a demonstration outside the Home Office in central London on September 5, 2012.

LONDON - Britain's advertising watchdog said on Wednesday that government posters urging illegal immigrants to "go home or face arrest" were not offensive despite hundreds of complaints - but banned them for using misleading statistics.

The posters were mounted on trucks and driven around London for a week in July, in a pilot programme offering help for people to return to their country of origin.

The campaign split the Conservative-Liberal Democrat government, with one Lib Dem minister calling it "stupid and offensive", while other critics said it was reminiscent of the language used by racist groups in the past.

The posters feature a huge picture of a pair of handcuffs together with a number said to represent the number of arrests in the local area and the words: "In the UK illegally? Go home or face arrest."

Some 224 people complained to the Advertising Standards Authority (ASA), but in a ruling on Wednesday the watchdog said the campaign "was unlikely to cause serious or widespread offence or distress".

However, it said a claim about the number of arrests cited "had not been substantiated" and as such the posters should not appear in their current form again.

"Although distasteful to some, we've ruled that the Home Office ad wasn't offensive or harmful. But it was misleading," said ASA chief executive Guy Parker.

The Home Office welcomed the ruling, saying: "We have always been clear that this campaign was about encouraging illegal immigrants to leave the country voluntarily and was not targeted at particular racial or ethnic groups."

Immigration is a major issue of public concern in Britain and Prime Minister David Cameron's government has pledged to cut the number of people entering the country from hundreds of thousands a year to tens of thousands.