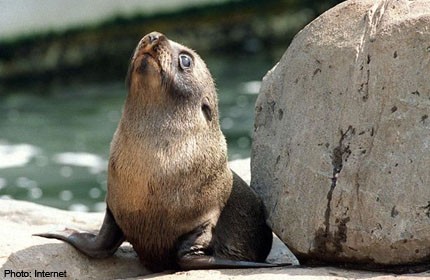 This Bristol Zoo seal was allegedly punched, but is now back on public display after being checked by a vet.

LONDON, England - A British zoo said on Wednesday it has suspended one of its animal keepers for allegedly punching a seal.

The animal, an American fur seal, has been examined by a vet and appears well, but an investigation is under way.

The incident occurred at Bristol Zoo in western England while the seal was being weighed, a spokeswoman told AFP, without giving further details.

"A senior animal keeper at Bristol Zoo Gardens has been suspended pending further investigation of an alleged animal welfare incident that has recently come to light," the zoo said in a statement.

The zoo's chief vet Michelle Barrows had examined all the seals "and all individuals are behaving normally, engaging happily and playfully with keepers and guests in their enclosure", the statement said.

"Bristol Zoo would like to make it very clear that it has a zero tolerance towards such behaviour and takes its commitment to the highest standards of animal welfare and conservation seriously," the statement said.

South American fur seas are natives of South America and were hunted almost to extinction for their rich, warm fur. They belong to the same family as sea lions.