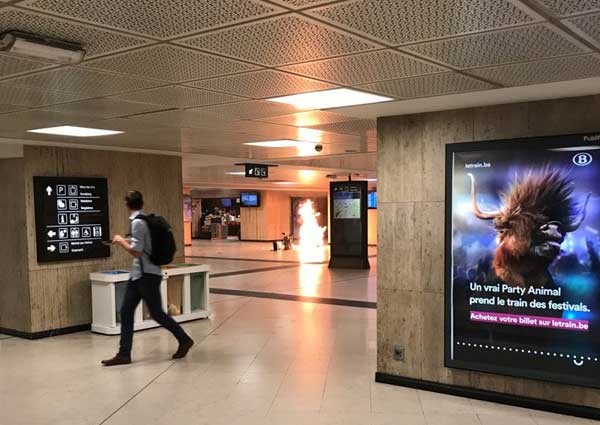 Brussels – Belgian soldiers shot dead a suspected bomber who set off an explosion in one of the busiest train stations in Brussels on Tuesday.

Here is what we know so far about the incident, the latest in a wave of attacks to hit European cities: .

The authorities say the suspect entered Gare Centrale at 8:39 pm (1839 GMT) Tuesday and twice approached a group of about 10 passengers in the departure hall above the platforms.

“He grabbed his suitcase while shouting and causing a partial explosion. Fortunately nobody was hurt,” Eric Van Der Sypt, a spokesman for the federal prosecutors office, told a press conference on Wednesday.

“The suitcase immediately caught fire. The man then left his luggage burning and went down to the platform in pursuit of a station master,” Van Der Sypt said.

“The man then returned to the hall where he rushed to a soldier shouting ‘Allahu Akbar’ (God is Greatest). The soldier immediately opened fire and hit the individual several times. The latter died on the spot as a result of his injuries,” he said.

The suspect was not wearing a suicide belt, as some Belgian media had reported, Van Der Sypt said.

There were no other casualties.

“It could have been much worse. It is clear that he wanted to cause more damage than he did,” Van Der Sypt said.

Who is the suspect?

The bomber was a 36-year-old Moroccan national, identified only by his initials O.Z. and born January 1981.

“He was not known to the authorities for any terrorism connection,” Van Der Sypt said, declining to give the man’s full name while the investigation continues.

A witness described the suspect as well-built and tanned with short hair, wearing a white shirt and jeans.

Where did it happen?

Central Station is one of the three main stations in the Belgian capital, along with Gare du Midi and Gare du Nord.

Originally designed by architect Victor Horta in the Art Nouveau style in 1912, construction was not finished until the 1950s due to World War II.

It is a few hundred metres from the Grand Place, a UNESCO world heritage site and one of Belgium’s main tourist attractions.

How did people react?

The explosion and gunfire sparked a rush of hundreds of people.

Some crossed the rail track to get away while others hid in local shops and cafes, Belgian media reported.

A railway spokeswoman said some people were crying and shouting.

Police quickly sealed off the scene and said around half an hour later that the situation was “under control”.

Rail travel to and from the station was swiftly halted, and nearby stations closed. Normal services resumed Wednesday morning.

After holding a National Security Council meeting on Wednesday, Belgian Prime Minister Charles Michel told reporters that a “terrorist attack has been avoided” and that extra security measures would be put in place.

“We are not allowing ourselves to be intimidated by terrorists,” Michel added.

Belgium’s national crisis centre said it was keeping the country’s terror level at three out of four, adding that there was no immediate information to suggest that another attack was imminent and that it should be raised to the top level.