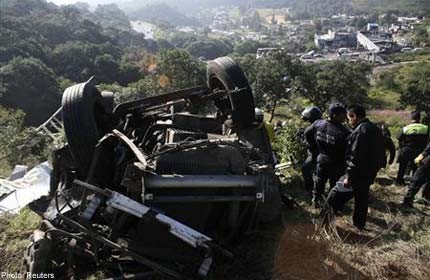 MEXICO CITY - At least 14 people died on Friday when a bus hurtled down a hillside on the outskirts of Mexico City, ejecting six victims through the windows and leaving 25 injured, police said.

Before it careened off the highway, the bus was en route to the city of Toluca in the hills of the State of Mexico, which surrounds much of the capital.

"There wasn't a collision with another vehicle, but instead the bus veered off the asphalt and plunged down the mountainside about 100 or 120 meters," Miguel Angel Contreras, the attorney general of the State of Mexico, told reporters.

The cause of the accident remained unclear, he said.