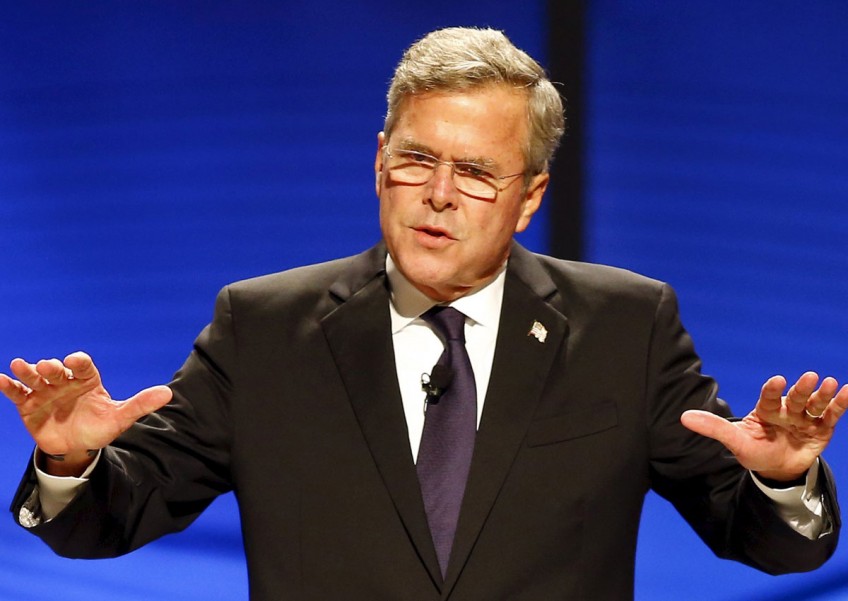 WASHINGTON - Jeb Bush appeared destined to waltz to the 2016 Republican nomination, but his presidential bid has been upended to the point that even his cherished family pedigree might not be enough to salvage his flagging campaign.

Trailing badly in the polls, reportedly slashing campaign payroll by 40 percent and scaling back on travel costs, Bush is now one of many middle-of-the-pack candidates in a wide GOP field, rather than the man Republicans would naturally gravitate to as they seek to win back the White House.

The former Florida governor drew big money early in the race. But Bush has been dunked by a dramatic populist wave that brought bombastic billionaire Donald Trump to the fore.

"He's been Trumped, as they all have," Tim Malloy of Quinnipiac University, whose recent poll in early voting Iowa showed Bush with just five percent support, told AFP.

In an effort to lift Bush's campaign off life support, three generations of his famous family rallied around Jeb, gathering in Houston, Texas for a two-day closed-door reunion aimed at reassuring donors that a third Bush presidency was more than a fleeting possibility.

Former presidents George H.W. Bush and George W. Bush, Jeb's father and brother, were on hand to press the flesh and snap photos with deep-pocketed backers, as the 2016 candidate sought to strike a motivational tone for the contest ahead.

Over breakfast with donors Monday, the 62-year-old Bush laid out his "broad, big and bold optimistic message," said Florida lobbyist and consultant Slater Bayliss of Advocacy Group at Cardenas Partners.

Bayliss was one of many donation bundlers - whose role is to organize and collect campaign contributions - in attendance.

Charles Foster, a prominent immigration lawyer who raises money for Bush, said the meeting was mischaracterized by some as an emergency session where the clan swooped in to reverse the slide.

"It's a long race and Jeb's campaign is set up to go the distance," he told AFP.

"Objectively, Jeb has the best record, most experience. And there is a faith that we have the right candidate." The faith, at least out on the campaign trail, is being tested. Back in mid-July Bush was leading the pack, with nearly double Trump's support.

Today, the fortunes are flipped, with Trump more than tripling Bush's poll numbers, which stand at barely seven percent, according to the RealClearPolitics average.

"Here was, to the minds of most, the most serious frontrunner the Republicans have, and he's been knocked down to reducing staff and fighting for his life," said Malloy.

'How can this be happening?'

Even supporters concede that the contours of this presidential primary are "much different than anything anyone could have forecasted," Bayliss said.

Republican campaigns, including Bush's, are recalibrating as a result.

His supporters hope the Trump wave crests quickly, to allow Bush to position himself as the candidate best qualified to challenge likely Democratic nominee Hillary Clinton.

"After having a fling with Trump and dating Carson, I think eventually these primary voters, I think they'll find their way to governor Bush, because they'll learn he's a serious, accomplished candidate with a legitimate record of governing," Bayliss said.

With three months before the first state-wide votes in the nominations race, Bush remains in an unenviable spot.

"The nervousness is not so much that Jeb has gone down in the polls, but why is Trump going up," said one millionaire Bush donor who asked not to be named.

"How can this be happening with a couple of candidates who have absolutely no chance of getting close to winning?" But Trump's numbers "are getting soft, and Jeb Bush will continue to sharpen the saw on his message," the mega-donor said. "I think he'll come back." Trump, living up to his reputation for pointed barbs, ridiculed Bush for "meeting today with mommy and daddy" in Houston.

Bush meanwhile telegraphed his exasperation with the state of the race.

"I've got a lot of really cool things I could do other than sit around being miserable, listening to people demonize me and me feeling compelled to demonize them," he fumed to attendees at a Saturday forum in South Carolina.

"Elect Trump if you want that."