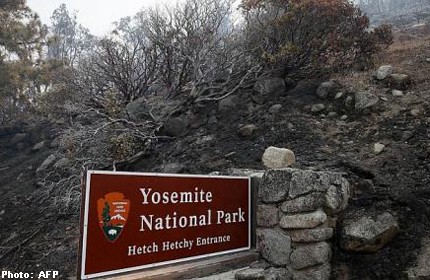 The blaze - named the "Rim Fire" - erupted on Saturday in the Stanislaus National Forest to the west of Yosemite, one of the most popular tourist attractions in California.

By early Friday the inferno had destroyed more than 42,000 ha while more than 2,000 firefighters were tackling the flames.

The blaze was classified as only two per cent contained and was threatening some 4,500 homes, according to the official fire information website Inciweb.

California Governor Jerry Brown on Thursday declared a state of emergency, meaning extra resources can now be mobilized in order to battle the fire.

According to the Los Angeles Times, nine homes have already been destroyed by the fire whose fumes could be felt in Reno, Nevada, some 250km away.

One of the main routes into Yosemite, the 120 highway, has been closed, according to Inciweb, but other roads into the park remain open.

The blaze is one of several large fires currently raging in the western United States. In Idaho, the "Beaver Creek" fire near the ski resort of Sun Valley has destroyed some 45,000 ha and was 67 per cent contained on Friday.