California prepares for war with Trump over environment 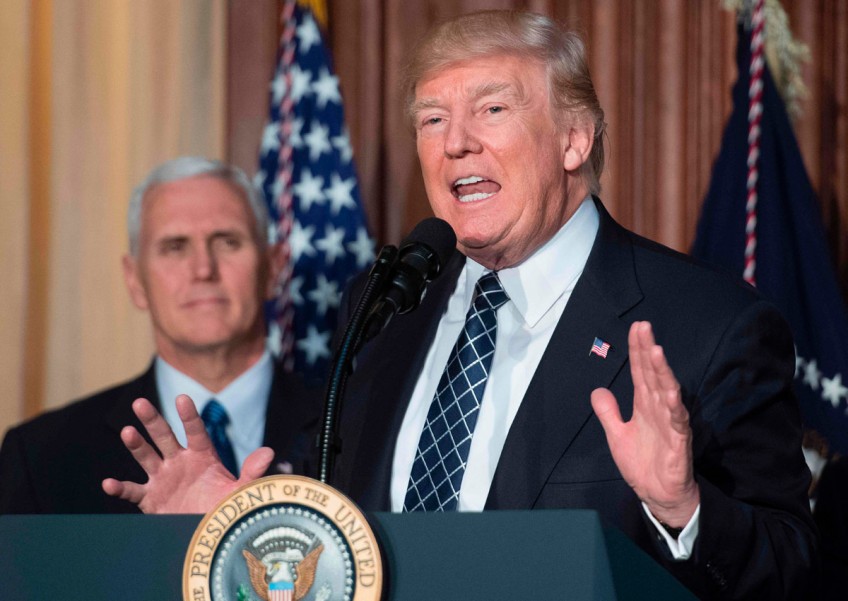 LOS ANGELES - California, one of the most progressive in the US on climate issues, is heading toward a legal showdown with the Trump administration over its environmental policies.

The battle is shaping up as President Donald Trump signed an executive order on Tuesday rolling back key Obama-era measures to combat climate change.

But the measure has environmental groups and officials in California - which has led the fight to curb climate change and has the largest automobile market in the country - up in arms and vowing a showdown.

"Gutting #CPP is a colossal mistake and defies science itself," California Governor Jerry Brown said in a tweet, referring to the Clean Power Plan aimed at curbing global warming.

"Erasing climate change may take place in Donald Trump's mind, but nowhere else," he added.

Brown has led California's climate change crusade, which saw the state in the last decade significantly slash its yearly climate-warming emissions by about 35 million metric tons.

It has pledged to cut them even further by 2020, with other states looking to follow suit.

Los Angeles Mayor Eric Garcetti joined Brown in saying on Tuesday that Trump would meet with fierce resistance over his new directive.

"No matter what happens in Washington, we will work to meet our Sustainable City Plan goal to reduce greenhouse gas emissions 80 per cent by 2050, move toward zero emissions transportation, and pursue our vision of a 100 per cent clean energy future," the mayor said.

Although the federal government sets emission standards for cars in the United States, that is not the case in car-crazy California.

In 1970, the state struck an agreement to adopt stricter air quality rules to combat the smog that plagues the vast Los Angeles metropolitan area.

While the auto industry initially pushed back at the stricter measures, today the state has more than half of the plug-in electric cars in the country.

But there are fears that this could change, should Trump - who has called global warming a hoax - direct the Environmental Protection Agency to roll back on the state's special waiver for tougher emissions rules.

California leaders have already said that they would not go down without a fight and have vowed to push forth with even stricter measures.

Experts say Trump could very well rescind the waiver - which would lead to fierce legal battles - or adopt new federal regulations without challenging those of California and 13 other states that have adopted the same stringent clean air standards as California.

"The third option is to go to Congress to revoke the Clean Air Act and that's what we fear the most," said Stanley Young, a spokesman for the California Air Resources Board.

Cara Horowitz, co-executive director of the Emmett Institute on Climate Change and the Environment at UCLA, said that while it is impossible to predict the outcome of a showdown between California and the Trump administration, the state's track record in combatting pollution was a plus.

"My sense is that California has a long history of aggressively regulating pollution and getting these waivers," she said.

As to the new EPA chief Scott Pruitt's declared skepticism about climate change, experts say that in the end, scientific data will prove the best defence.

"The fact that he denies it doesn't change the science or the law," Young said.

He added that nonetheless Pruitt may prove a savvy adversary given his legal background in suing the EPA repeatedly as attorney general of Oklahoma.

"He knows exactly how the agency works and what you can do to do the most damage," Young said.

"We thought he was going to use a hammer and instead he chose to use a scalpel."