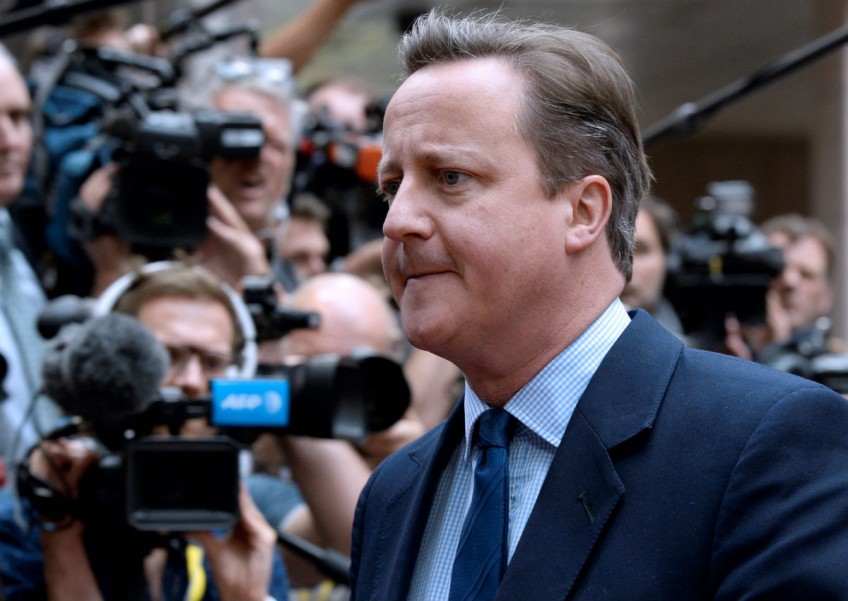 Five days after Britons stunned the European Union by voting to quit the 28-nation bloc, key European leaders bluntly told Britain they wanted it to leave quickly - and not expect special treatment.

European President Donald Tusk said the bloc was ready to start divorce proceedings with Britain "even today" and the European Parliament called on Britain to initiate the departure process "as soon as possible." In Berlin, German Chancellor Angela Merkel warned Cameron could not "cherry-pick" in the exit negotiations - and there would be a price for Britain to pay.

"Anyone wishing to leave this family cannot expect to lose all the obligations but keep the privileges," Merkel told the German parliament.

The summit, starting mid-afternoon, takes place amid deep anger among the 27 other European leaders over Cameron's decision firstly to call the 'Brexit' referendum - and secondly his handling of the campaign itself.

That resentment has been compounded by fury over suspicions that Britain will now drag its feet over leaving, which would boost rising eurosceptic forces within the EU.

Cameron, who had fought to remain in the EU and has said he will step down, told his parliament on Monday that he will not yet start the two-year countdown on leaving the EU.

It begins when Britain formally invokes Article 50 of the EU's Lisbon Treaty.

His successor is not expected to be appointed until September.

But European Commission chief Jean-Claude Juncker, speaking in a stormy session of the European Parliament where he was heckled by Brexiteer Nigel Farage, told Cameron to waste no time, adding: "No notification (of Article 50), no negotiation".

"It is we who must decide what happens, not just those who wish to leave the European Union," Juncker said, echoing comments on Monday from Merkel, French President Francois Hollande and Italian Prime Minister Matteo Renzi in Berlin.

Juncker said he had banned officials from holding "secret" talks with Britain.

"There will be no informal or formal talks on the exit of Britain until an application has been filed to leave the European Union," Merkel has said.

Stoking the pressure, the European Parliament on Tuesday passed a resolution at an emergency session calling for Britain to trigger Article 50 - which initiates the Brexit process - "as soon as possible." Facing boos and jeers from fellow MEPs, Farage said he had had the last laugh and predicted Britain would not be the only state to leave the EU.

"Isn't it funny. When I came here 17 years ago and I said I wanted to lead a campaign to get Britain to leave the EU, you all laughed at me but you are not laughing now," said Farage, who nevertheless shared a hug with Juncker.

But Britain's decision has also put the remaining 27 members of the EU - who will meet without Cameron on Wednesday - under pressure to come up with an adequate response to stop other countries following Britain out of the door.

Germany, France and Italy have urged steps among the rest of the EU jointly to boost cooperation on security as well as programmes to boost economic growth and youth employment.

Tusk on Tuesday proposed holding a meeting in September to discuss the bloc's future.

The referendum result has caused an earthquake in British politics.

It has not only forced Cameron to quit but also left opposition Labour leader Jeremy Corbyn fighting for his political life.

Around 20 members of Corbyn's shadow cabinet have resigned and the result of a secret ballot of Labour MPs on a no-confidence motion on his leadership is expected to be announced later Tuesday.

The winner may call a general election later this year.

Investors, meanwhile, remain deeply unsettled at the prospect of one of the EU's biggest economies leaving the bloc, wiping billions off stocks worldwide since the shock referendum result - markets had banked on "Bremain" - last Friday.

Both ratings agencies listed a possible second referendum on Scottish independence as a significant risk. Britain as a whole voted by 52 percent to 48 percent to leave the EU but 62 percent of Scots voted to stay.

The pound actually rose slightly on Tuesday, but this came after sterling hit a new 31-year low in New York and analysts warned the currency could face fresh selling as the crisis develops.

"None of the chaos induced by last Friday is anywhere near going away: the country is still without its next prime minister, the Labour party is in disarray, and the actual process to exit the EU has not even begun," Spreadex analyst Connor Campbell told AFP.