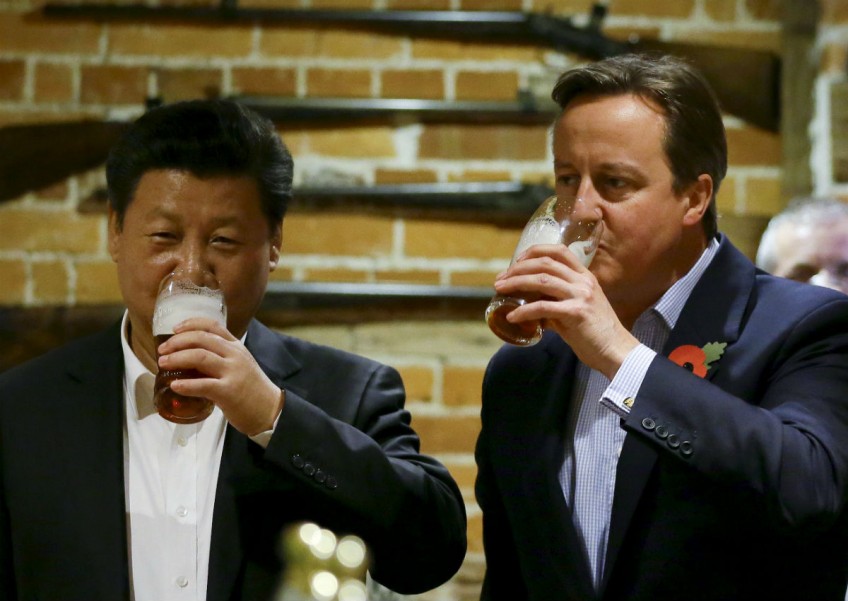 President Xi Jinping was served with Britain's famous fish and chips in a traditional English pub with British Prime Minister David Cameron on Thursday, as their meeting took an informal turn that observers say let them build their relationship out of the limelight.

After a state banquet at Buckingham Palace and another banquet at London's Guildhall, Xi experienced something less formal at Chequers, a tranquil country estate that has hosted foreign dignitaries since becoming the official retreat for prime ministers in 1921.

Receiving a warm welcome at Chequers, Xi visited a pub with Cameron after they held talks with their aides at the country residence. No 10 Downing Street said the two leaders' discussions would focus on global affairs.

The visit to Chequers, the neo-Gothic-style estate in Buckinghamshire, was planned as a counterpoint to the official welcome and formal meeting.

In the evening, Xi and first lady Peng Liyuan were to sit down to a full dinner with Cameron and his wife, Samantha.

"Chequers is an important venue for British diplomacy. As the prime minister's country retreat - like Camp David for the US president - Chequers provides opportunities for individuals to communicate away from the glare of the press. Again, at least nominally, they can relax a little,"said Simon Rofe, director of the global diplomacy MA programme at University of London's School of Oriental and African Studies.

Deborah Johnson, of Historic UK Ltd, said Xi and Cameron's visit to a pub would provide a further opportunity for typically British relaxation.

"The local pub is the hub of the local community in Britain, a place to meet, chat and relax with friends. Fish and chips is a national dish enjoyed by all, an integral part of the British culinary tradition," she said.

Erik Goldstein, a professor of international relations at Boston University in the United States, also spoke of the transition to informal surroundings.

"It has become part of the unofficial protocol of visits by leaders of major states to have a 'photo opportunity' at an informal location. In this instance it is more for British domestic consumption, and is a balance to the pageantry," he said.

Goldstein noted that the United States also seeks such opportunities in meetings with foreign leaders.

During his visit to the US last month, Xi and US President Barack Obama had a three-hour private dinner, investing more time in building personal ties.

In 2013, Obama met in a "no necktie" summit with Xi at the Sunnylands estate in Rancho Mirage, California.

"A state visit always has one "offsite"visit away from the capital, in both the US and the UK," Goldstein said.

After dinner at Chequers, Xi was to fly to Manchester for the final day of the state visit.