Are you excited for the Met Gala? We are just about ready for it. The annual fundraiser for the Costume Institute at the Metropolitan Museum of Art in New York City is also widely considered as the most important night in fashion, and understandably so.

In the past, we've seen the biggest stars turn up in the most glamorous outfits, to the most unexpected ensembles. That's why we're so invested in this particular red carpet. Seeing how celebrities dress according to the Met Gala theme is always interesting (even if most don't actually follow it).

This year, you already know the theme is "Camp: Notes on Fashion." But if you have no idea what the hell that means, worry not. Here's your cheat sheet.

WHAT IS CAMP FASHION?

"Ironic, kitschy, and tongue-in-cheek" are some of the words Refinery29 used to describe it. Exaggerated and tacky are also other words associated with it. If you want to stick to the dictionary definition, according to Merriam-Webster, it is "something so outrageously artificial, affected, inappropriate, or out-of-date as to be considered amusing." 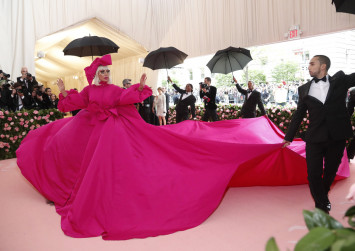 Actually, if you think about it, Camp fashion has been around for centuries, but it was writer Susan Sontag who formally coined the term in 1964, when she published her essay, "Notes on Camp" in the Paris Review. "The essence of Camp is its love of the unnatural: of artifice and exaggeration," she wrote. "It is the love of the exaggerated, the 'off,' of things-being-what-they-are-not." Moreover, Sontag talks about how Camp's appeal rides on its paradoxical nature. "I am strongly drawn to Camp, and almost as strongly offended by it," she said. Sontag explains further that "Camp is playful, anti-serious. More precisely, Camp involves a new, more complex relation to 'the serious.' One can be serious about the frivolous, frivolous about the serious."

In 2019, Camp is practically everywhere (more on this later). "We are going through an extreme Camp moment, and it felt very relevant to the cultural conversation to look at what is often dismissed as empty frivolity but can be actually a very sophisticated and powerful political tool, especially for marginalised cultures," the Metropolitan Museum of Art's curator-in-charge Andrew Bolton told The New York Times. "Whether it's pop Camp, queer Camp, high Camp, or political Camp-Trump is a very Camp figure-I think it's very timely."

WHAT'S THE HISTORY BEHIND CAMP FASHION?

When talking about Camp, you can't NOT talk about the Black and queer (particularly, queer and trans people of colour community.)

Erique Zhang, a PhD student in the Media, Technology, and Society programme at Northwestern University, further tells Refinery29, "I would call Camp a very queer aesthetic in that it's something that is so over-the-top that it challenges the norms of what's considered appropriate." Adding, "If there's one thing about queer culture that is the definition of Camp, it would be drag," Zhang says. However, he insists that "even in drag, it's still a spectrum. There are Camp queens-that's a subcategory of drag-but even glamour queens are still Camp, because it's still an aesthetic that's embracing this over-the-top version of femininity that isn't truly grounded in what actual women are like."

"Drag is Camp, parodying gender and culture in its extravagance of visual and attitude, including everyone from 1930s cabaret icon Josephine Baker, who swathed herself in rhinestones, to David Bowie's gender-bending Aladdin Sane/Ziggy Stardust days, to the performances of Trixie Mattel," Them writer Elyssa Goodman explains further.

As for the Black community, Teen Vogue stresses that "Camp as an aesthetic relates to Blackness [that] spans many disciplines, from Vaudeville and minstrelsy performances and the golden age of Hollywood cinema, to Black beauty traditions like the Bronner Brothers International Beauty Show and the Detroit Hair Wars to the gay ball culture of the 1980s, and the exaggerated, gaudy fashion ideals that came out of hip-hop."

"One reason Black culture is not within the 'Camp' conversation is because the term itself has a lot of basis in theatrical, outlandish, exaggerated, and extreme fashion," fashion historian Darnell Lisby tells Teen Vogue. "Even though I believe there are so many examples of 'Camp' in Black culture, there is a broad paint stroke over the Black experience, which is perceived to be downtrodden instead of vibrant. In essence, it seems like many forget about icons like Prince or Jimmy Hendrix, who were the epitome of this term."

Now that you know the importance of these two cultures in relation to the Met Gala theme, we hope you keep that in mind and not see the iconic fashion style merely through a White lens. And hopefully, the Met honors these communities enough. We don't want the event to be another case of whitewashing.

WHERE HAVE YOU SEEN CAMP?

As mentioned, Camp is practically everywhere these days. You'll see them in previous and present collections and runway shows. Moschino's consistent use of mass consumerism culture in their designs is one example. There's also Balenciaga. Remember their platform crocs, and Ikea-inspired tote bags? Viktor & Rolf's meme gowns are also considered Camp. Of course, we can't not mention Thierry Mugler, Anna Sui, and Gucci-labels which just scream "Camp." Meanwhile, Virgil Abloh's designs for Off-White are enough for him to be recognised as "a modern Camp master." Them points out, "Virgil Abloh's designs combine a multitude of cultural references, a reimagining of sportswear and streetwear aesthetics, and a tongue-in-cheek sensibility." In particular, the site highlights the brand's Pre-Fall 2018 collection and its "deadpan use of labels on clothing-a little black dress printed with the words 'little black dress' or a denim jacket printed with the word 'denim'" as great examples of Camp.

Camp fashion also goes beyond runways and fashion editorials. Pop culture is rife with them. In fact, two of the biggest pop stars of our generation, Rihanna and Lady Gaga, can be considered queens of Camp. Rihanna has repeatedly stole the show at the previous Met Galas. Last year, she channeled a sexy Pope in a custom Maison Margiela by John Galliano. You can't get any more ironic than that. As for Lady Gaga, her famous "meat dress" has become a legend of its own. And who can forget her entrance to a fashion show literally atop a faux horse named Camp? I mean. Oh, and I just have to mention Björk sporting a Marjan Pejoski swan dress at the 2001 Academy Awards, carrying an actual egg that she "hatched" on the red carpet. Iconic.

Who do you think will be crowned queen of Camp at this year's Met Gala?