PARIS - A 31-year-old man on a jihadist watchlist rammed a car loaded with guns and a gas bottle into a police van on the Champs-Elysees Monday but inflicted no casualties, in the latest of a string of attacks in Paris, sources said.

The assailant died in the incident, although investigators offered no immediate details about the cause. There has been no claim of responsibility for the assault.

The attack - which occurred just a short distance from where a jihadist shot dead a police officer two months earlier - was carried out by a man who had been on France's security watchlist since 2015 over ties to "the radical Islamist movement", sources close to the probe said.

They identified him as Adam Dzaziri, who had been raised in the hardline Salafi Islamic ideology, and did not have a criminal record.

Interior Minister Gerard Collomb said a car hit the leading vehicle in a line of police vans as they headed down the Champs-Elysees, near the Grand Palais exhibition hall.

"The security forces have been targeted in France once again," he said.

Video showed a thick orange smoke pouring from the car after the impact as the vehicle sat in the middle of the prestigious avenue which is lined with shops and cinemas.

Police sources told AFP that they found a Kalashnikov assault rifle, two handguns, ammunition as well as a gas bottle in the car.

The "arms, explosives... could potentially blow this car up," Collomb said. Sources previously told AFP that there were multiple gas bottles in the car.

No police or bystanders were injured in the incident, which occurred near the Grand Palais exhibition hall.

The suspect's father told AFP that his son "had a registered weapon, he practiced shooting". A source close to the case said the young man had a firearms permit.

Police searched on Monday night the residence the suspect shared with his family in Plessis-Pate, a town about 40 minutes' drive from central Paris.

The local mayor Sylvain Tanguy said the family was "very discreet and didn't go out much".

"You could tell when you saw them in the street that they were very religious," he said.

Anti-terrorism prosecutors have opened an investigation into the incident that briefly sparked chaos on the world famous avenue.

"People were running every which way," said a 51-year-old bystander who gave his name only as Alexandre. "Some shouted at me to get away."

Police closed two of the Metro stations on the Champs-Elysees, but two hours after the attack tourists were back taking selfies of the Arc de Triomphe and visiting shops.

Collomb said the attack "shows once again that the threat (of an attack) remains extremely high in France".

The incident occurred almost two months to the day after a policeman was shot and killed nearby in the runup to the first round of France's presidential election.

The gunman, Karim Cheurfi, was shot dead by police and a note praising the Islamic State group was found next to his body.

On June 7, a hammer-wielding Algerian man was shot and wounded by police after he struck an officer on the head in front of Notre Dame cathedral in Paris, shouting it was in revenge "for Syria".

He had pledged allegiance to the Islamic State group in a video found at his home.

The attack Monday was the latest in a string incidents in France and Britain. 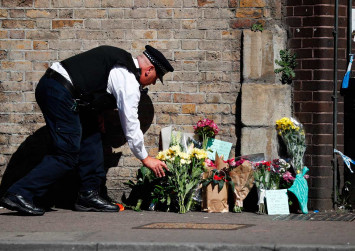 Read Also
Driver of van that rammed Muslims in London was Caucasian born in Singapore: Reports 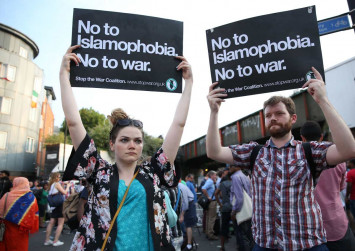 Earlier Monday, a van ploughed into a crowd of Muslims near a London mosque, injuring 10 people. It was the second terror attack this month in the British capital.

Two weeks ago jihadists used a van and knives to kill eight people enjoying a night out around London Bridge. Three of the victims were French.

In May, a suicide bomber killed 22 people, including children, at a concert by US singer Ariana Grande in Manchester.

France remains under a state of emergency imposed after the November 2015 attacks in Paris, when IS jihadists slaughtered 130 people in a night of carnage at venues across the city.

A senior police officer and his female companion were both killed by a radicalised man at their home in the Paris suburbs a year ago.

And in July last year, a radicalised Tunisian man killed 86 people as he rammed a truck through a crowd watching Bastille Day fireworks in the Riviera city of Nice.

On Wednesday, the French government is to unveil a new anti-terrorism law, designed to allow the state of emergency to be lifted.

"To those who question the necessity of such laws, you can see that the state of France today necessitates it," Collomb said.

"If we want to effectively ensure the security of our citizens, we must be able to take a certain number of measures," he added.