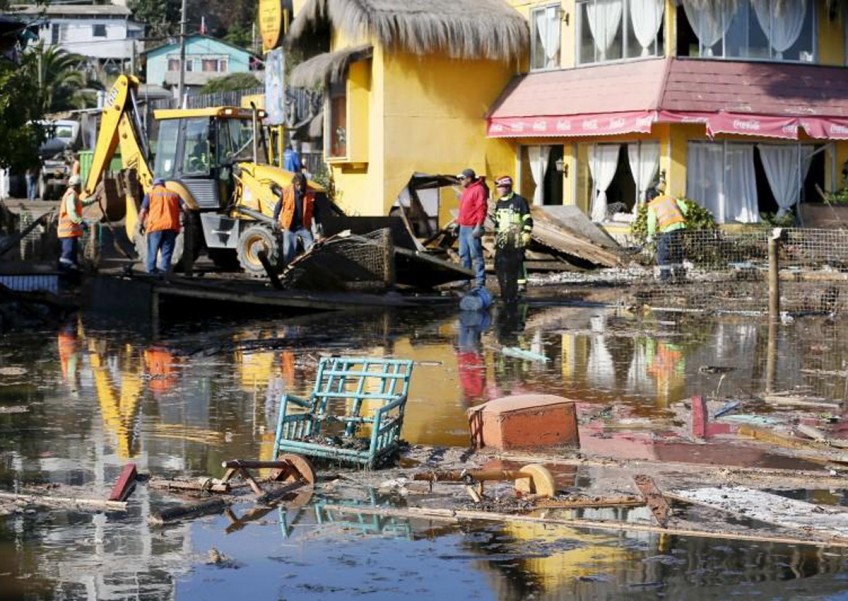 Residents sifted through rubble on Thursday and saved what they could from homes destroyed by a magnitude 8.3 earthquake in central Chile that killed 11 people, forced 1 million from their homes and sent giant waves crashing into coastal areas.
Reuters

TONGOY, Chile - Aftershocks shook the South American country following Wednesday's quake, the strongest in the world this year and the biggest to hit Chile since 2010. But some residents expressed relief that the destruction had not been greater.

The northern port city of Coquimbo, where waves of up to 4.5 meters (15 feet) slammed into the shore, was declared an emergency area by the government. The move gives the government a wide range of special powers. It was aimed at speeding aid to the city and allowed soldiers to patrol the streets to ensure security and prevent looting.

Large fishing boats had washed up onto the streets Coquimbo. Others vessels splintered, littering the bay with debris.

"We lost it all. It was horrible," said 79-year-old Hilda Zambra, whose home in Tongoy, a beach town some 40 km (25 miles) south of Coquimbo, was destroyed by surging waters.

"I don't know how I got out of there," she said as a shipment of Red Cross aid arrived in the normally quiet tourist destination and soldiers helped clear streets of debris. "It was dark. I jumped into some stranger's pickup truck. We left with what we had on our backs."

The homes of 610 people were so damaged that they were unable to return by late Thursday afternoon, according to government data. Some 179 homes were destroyed, 87,600 remained without electricity and 9,000 without clean water.

The government had ordered evacuations from coastal areas after the earthquake hit, seeking to avoid a repeat of a quake disaster in 2010 when authorities were slow to warn of a tsunami and hundreds were killed.

"We want to thank people for their co-operation, which allowed for a death toll that while unfortunate was not very high considering the strength of the earthquake," President Michelle Bachelet told reporters.

The latest quake also knocked out power in the worst hit areas of central Chile, although most buildings, roads and ports held up well. The quake was felt as far away as Buenos Aires in Argentina.

Bachelet, who said her government "learned a series of lessons" from previous disasters, began a tour of damaged areas in the town of La Serena, near Coquimbo.

Chile is the world's top copper producer and operations were suspended at two big copper mines as a precaution, sending prices on the London Metal Exchange CMCU3 to two-month highs in early Asian trading on concern over disruptions to supplies. Prices later dipped as concerns about long-term disruption subsided.

State copper miner Codelco said on Thursday morning it had restarted operations at its open-pit Andina mine and its Ventanas smelter.

London-listed Antofagasta Plc said it was inspecting installations at its flagship Los Pelambres copper mine and expected to gradually resume operations during the afternoon. Los Pelambres is the closest major mine to the quake epicenter.

Tsunami alerts were issued after Wednesday's quake across the Pacific, from parts of California to Japan and French Polynesia, although waves were generally expected to be small. In Chile, the tsunami warning was lifted on Thursday morning.

One port used for exporting copper and other natural resources was completely shut down on Thursday and three others closed for smaller vessels, suggesting trade flows might be interrupted.

In Illapel, some businesses began opening and heavy machinery moved in to start clearing up the rubble.

Quake-prone Chile has strict building regulations so newer buildings are able to withstand even strong quakes. Many homes in Illapel and surrounding areas are simple, adobe houses and are more prone to damage.

A makeshift altar was erected in Illapel where a 26-year-old woman was killed by a wall that collapsed when the quake hit.

Chile is due to celebrate its national holiday on Friday, but some roads between Santiago and the north remained cut off.

The quake was the latest natural disaster to roil mining in Chile, which accounts for a third of global copper output. Northern Chile was hit by severe floods earlier this year, while a volcanic eruption caused problems for residents in the south.

Chile runs along a highly seismic and volcanic zone where tectonic plates meet and often experiences earthquakes. In 2014, an 8.2-magnitude quake struck near the northern city of Iquique. In 2010, an 8.8-magnitude earthquake in central-southern Chile triggered a massive tsunami, and more than 500 people were killed.

In the hours after that quake, President Bachelet and her government misjudged the extent of damage and declined offers of international aid, delaying the flow of assistance to disaster areas.

Bachelet's government was also slow to prevent looting after the quake. Its failings hit her high approval ratings at the end of her presidential term, although she remained popular and was elected again in 2013.