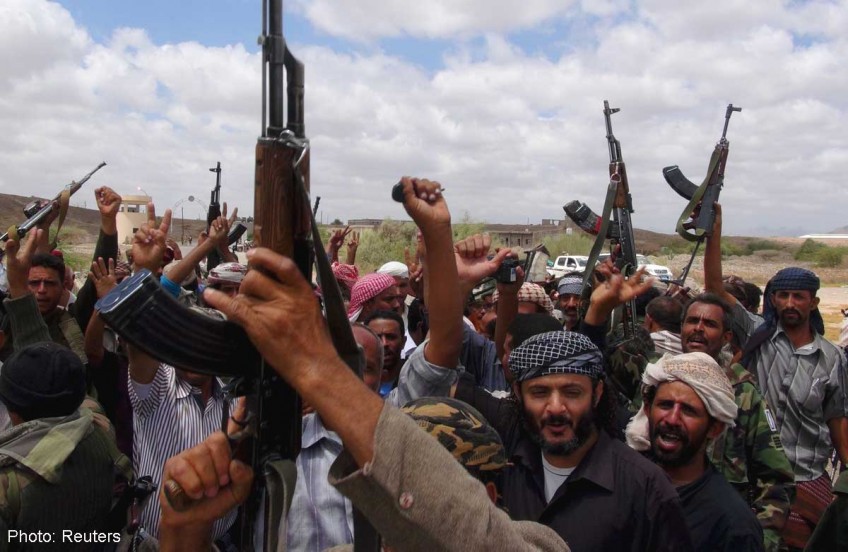 SINGAPORE - Oil prices have surged on growing conflict in Yemen, though trade sources said there was ample crude supply in global markets to replace any drop in exports to buyers such as China as long as the conflict did not cause broader disruption.

There is concern the crisis could escalate, exacerbating wider sectarian conflict in the Middle East, after air strikes by Saudi Arabia and its allies tried to beat back Houthi militia forces backed by Iran.

The move triggered an around 6-per cent rise in global oil futures LCOc1 CLc1.

"There is a big confrontation between Iran and Saudi ... This is more evidence that the geopolitical risk in the Middle East has become chronic," said Tony Nunan, a risk manager at Mitsubishi Corp in Tokyo.

Yemen exports about 1.4-1.5 million barrels of Masila crude each month, mainly to China. But a Chinese trade source said that volume was relatively small and could easily be replaced with West African crude.

Oil supplies in Yemen had already been disrupted by conflict.

Yemeni oil flows through the Marib pipeline, its main export route, at a rate of around 70,000 barrels per day (bpd). Before a series of attacks by tribesmen began against it three years ago, the pipeline carried around 110,000 barrels per day to Ras Isa, an export terminal on the Red Sea. Tribal conflicts and al Qaeda insurgency are disrupting oil and gas exports in other parts of the economy.

China's crude imports from Yemen in the first two months this year were 4.5 million bbls, up 315 per cent from the same period a year ago.

The Yemeni crisis risks spiraling into a proxy war with Shi'ite Iran backing the Houthis, whose leaders adhere to the branch of Shi'ite Islam, and Saudi Arabia and the other regional Sunni Muslim monarchies backing Yemen President Abd-Rabbu Mansour Hadi.