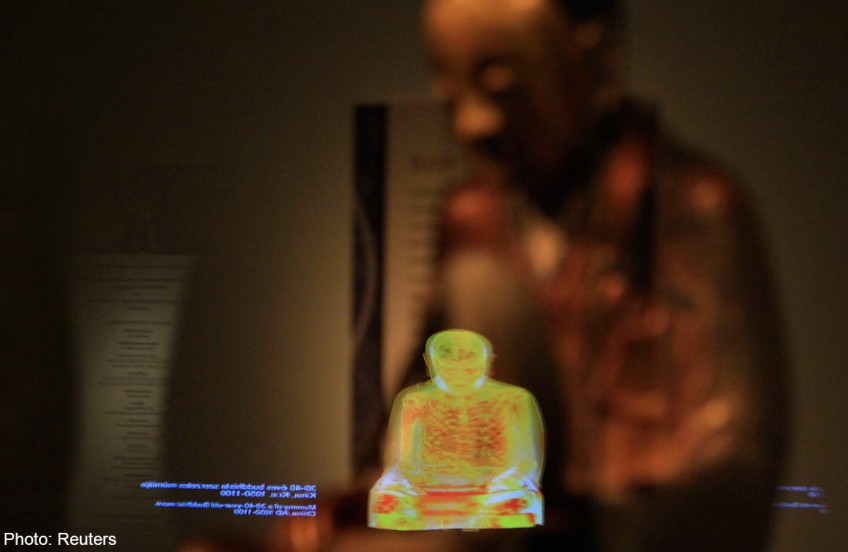 A scan image of the skeletal remains of a mummified monk, shown on a television monitor, is reflected in the glass display than holds the statue, at the Natural History Museum in Budapest March 4, 2015.

BEIJING - A Chinese province is seeking the return of a 1,000-year-old mummified monk, saying it was stolen two decades ago before resurfacing at an exhibition in Hungary, where it was suddenly withdrawn.

A Buddha statue containing a monk's remains was on display at the Mummy World Exhibition at Budapest's Hungarian Natural History Museum, which brings together 28 preserved corpses from different cultures around the world.

It was removed from the show, which has been running since October, reports said at the weekend - although details of its provenance remained unclear.

A spokesman for the province's Cultural Relic Bureau told China's official Xinhua news agency the statue is believed to have been stolen from a temple in Yangchun village.

A mummy statue worshipped since the 12th century went missing from the temple in 1995, the bureau said.

"When I saw the photo (of the Buddha statue) on the TV news, it immediately reminded me of our lost statue," farmer Lin Yongtuan told the state-run China Daily newspaper on Monday.

A message on the Budapest museum's website Monday said that the statue "had been removed and sent back to the Netherlands due to the request of the loaning partner, the Drents Museum".

Xinhua quoted a Drents Museum spokesman as saying the statue belonged to "a Dutch private collector who bought it legally in 1996".

A spokeswoman for the Hungarian museum, Monika Stefan Kiss, told the Hungarian news agency MTI the owner did not explain the decision, but was "entitled to withdraw the loaned piece at any time".

The incident is the latest case of allegedly stolen Chinese artefacts resurfacing abroad. Beijing has made the return of such relics a priority as it flexes its growing international muscle and tries to build public support at home.

The monument was pillaged by British and French troops in 1860 during the Second Opium War, an event seen in China as a national humiliation at the hands of Western armies. Beijing estimates that at least 1.5 million items were looted at the time.