China's treatment of Uighurs may be genocide, warns report by US Holocaust Museum

A protest against China’s treatment of Uygurs in Xinjiang.

One of the leading global authorities on the Holocaust and other mass atrocities warned on Tuesday (Nov 9) that Beijing’s policies targeting the Uighur Muslim population in far-west Xinjiang may have risen to the level of genocide, and that the world must act quickly to stop it.

“The United States Holocaust Memorial Museum is gravely concerned that the Chinese government may be committing genocide against the Uighur,” said a new report issued by the museum, which is located in Washington.

“The impunity with which the Chinese government has been able to commit these crimes thus far cannot persist,” it said. “The future of a people may depend on swift, coordinated action by global actors.”

The 56-page report is the latest sign that Beijing’s actions in Xinjiang – which the museum says include mass incarceration and surveillance, forced sterilisation and destruction of religious property – have raised alarms not just in Congress and the White House, but in a growing segment of the American public too.

It was published by the museum’s Simon-Skjodt Centre for the Prevention of Genocide, which describes its mission as seeking “to do for victims of genocide today what was not done for the Jews of Europe”.

About two out of every three European Jews died in the Holocaust, a total of six million victims.

For that reason, use of the term “genocide” in contemporary contexts – in Xinjiang and elsewhere – can be sensitive and contentious within parts of the Jewish community because of the enormous scale of destruction and death during the Holocaust.

The term is also debated in the legal community and among human rights watchers.

The museum is viewed as an influential voice on issues related to genocide, and in a report last year it labelled the situation in Xinjiang as crimes against humanity.

“A number of non-lethal acts which may be constitutive of genocide if committed with the requisite intent have been documented as being committed by the Chinese authorities against the Uighur community,” the museum said on Tuesday.

“They include: Causing serious bodily or mental harm; imposing measures intended to prevent births within the group; and forcibly transferring children of the group to another group.”

Beijing has repeatedly denied it is committing any wrongdoing against the Uighur, instead claiming that the ethnic minority group is being lifted out of poverty, educated and trained for work.

“There is an increasing entrenchment of Han supremacist values in the Chinese government’s treatment of the Uighur,” the museum said, “which has further dehumanised this minority group and nurtured an environment where genocidal ideologies can take root.” 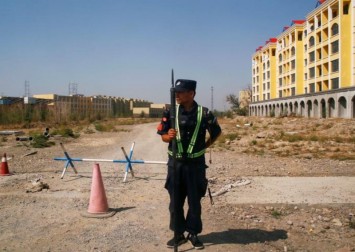 Liu Pengyu, spokesman for the Chinese embassy in Washington, said that all ethnic groups in China “live harmoniously together with equality, solidarity and mutual assistance”.

“There has never been any ‘genocide’ in Xinjiang,” he said. “We hope the relevant personnel can hold an objective and just position, stop making irresponsible remarks.”

In January, the Chinese foreign ministry said that Xinjiang “is an open area and we welcome all parties, including UN officials, to visit the region and respect Chinese laws”.

The museum’s report appeared to dispute that point, stating that they and other research institutions are “working under significant restrictions on access to critical information” related to the situation on the ground in Xinjiang.

“This is by design,” the museum said. “The Chinese government continues to intentionally impede the flow of information concerning its assault on the Uighur of Xinjiang.”

The US government, along with a handful of European parliaments, has labelled China’s actions in Xinjiang a genocide.

And US President Joe Biden has also made the explicit link between the Nazi regime in the 1930s and 1940s and Beijing’s policies in Xinjiang today.

“Sadly, when we look around the world today, we cannot say that the spectre of atrocity is behind us,” he said last month in a speech about human rights. “We see today the patterns, the choices, playing out around the world, even as we speak – the oppression and use of forced labour of the Uighur in Xinjiang.”