Chinese visit to Britain to see $64 billion in deals 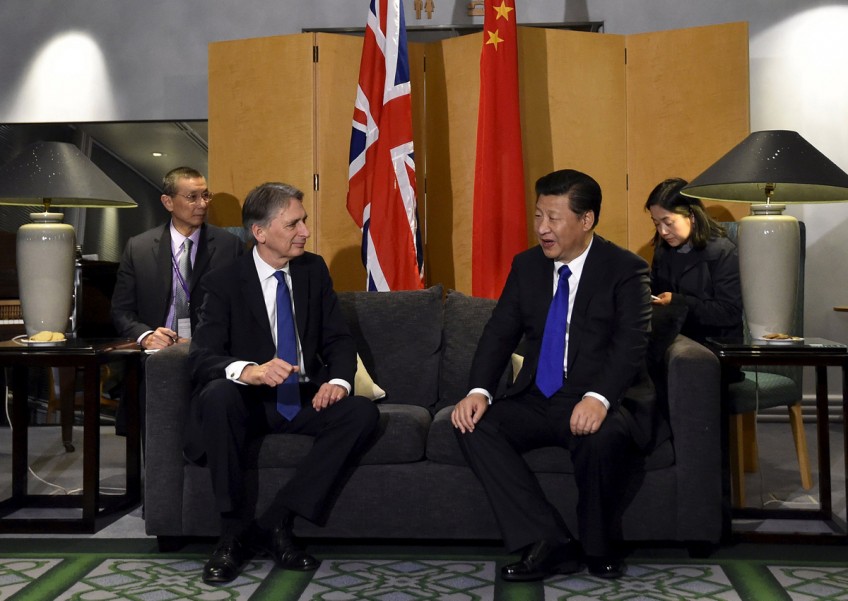 LONDON - Deals worth over 30 billion pounds (S$64.4 billion) are to be signed during the four-day visit of Chinese President Xi Jinping to Britain this week, the London government said on Tuesday.

Prime Minister David Cameron is courting stronger business ties with the world's second-largest economy and both countries have said the visit could mark a new "golden era" in relations.

Giving few details on the deals, Cameron's office announced they would be in industries including retail, energy, financial services and aerospace and create 3,900 jobs in Britain.

"This is going to be a very important moment for British-Chinese relations. Trade and investment between our two nations is growing and our people-to-people links are strong," Cameron said in a statement.

One major deal under discussion is for China to take a key role in a 24.5-billion pound project to build Britain's first new nuclear power station in decades, Hinkley Point C in southwest England.

The agreement includes the possibility of a Chinese "Hualong" reactor in Bradwell, the site of a partially-decommissioned nuclear plant owned by EDF northeast of London.

Xi and Cameron are due to visit the northwestern English city of Manchester where more deals are expected to bolster the government's "Northern Powerhouse" project, a bid to balance Britain's London-led economy.

The trip follows a five-day visit by British finance minister George Osborne to China during which he opened bidding for contracts to build a high-speed rail link that will link London with northern cities.

Xi's visit comes a decade after that of his predecessor Hu Jintao.

Relations between Britain and China cooled considerably in 2012, when Cameron received the Dalai Lama, the Tibetan spiritual leader considered a dangerous separatist by Beijing.