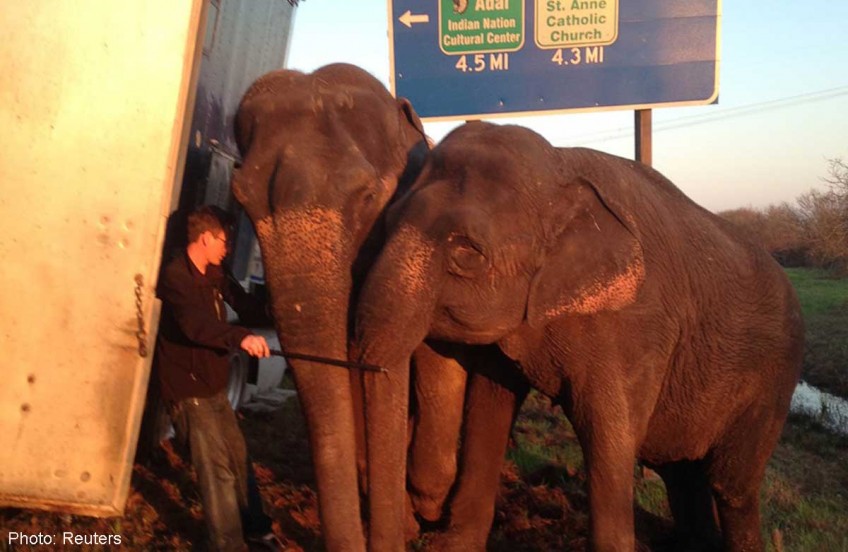 NEW ORLEANS - When an 18-wheeler truck became stranded by the side of a Louisiana road, two elephants inside came to the rescue.

Sheriff's deputies in Natchitoches Parish on Tuesday morning received a call about a stuck truck. Upon arriving on the scene, they saw two elephants preventing the vehicle from overturning.

The truck's driver, also an elephant trainer, walked the elephants out of the cargo compartment and directed them to help prop up the vehicle, sheriff's Captain Tony Moran said in an interview.

"It's creative," said Moran, who said the responding deputies were "just astonished to see it."

Leaning side-by-side, the elephants pushed with their weight against the truck, the sheriff's photos showed.

The truck was carrying three elephants from Florida. After a stop in New Orleans, they were on their way to a circus near Dallas.

The truck had pulled over on an interstate shoulder near Powhatan, Louisiana, about an hour south of Shreveport. The ground was soft after recent rains, the Natchitoches Parish Sheriff's Office said in a statement.

After summoning aid to right the truck, the driver walked the elephants back onto the truck, using spoken commands, Moran said. The elephants were unharmed and continued on their way.

Authorities did not issue any citations in the incident.