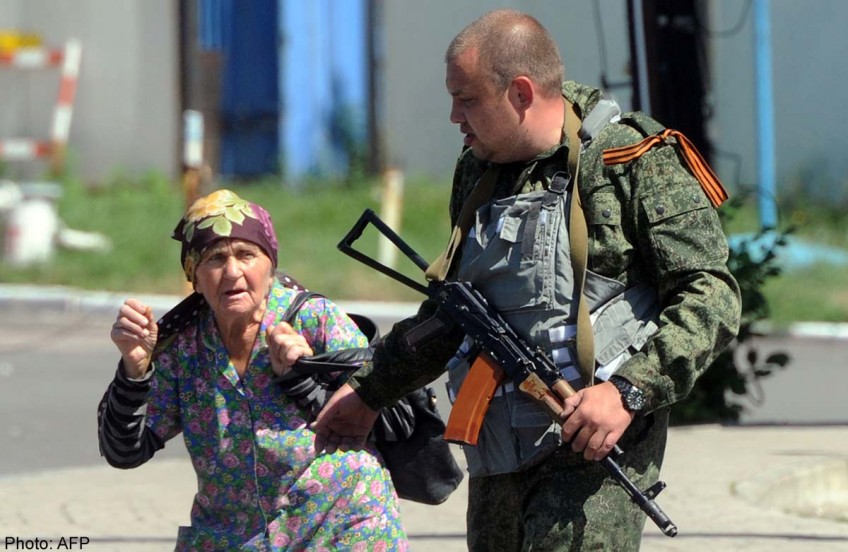 An armed pro-Russia separatist walks with a woman near the train station on July 21, 2014 as intense shelling rocked the area, in the rebel stronghold of Donetsk in eastern Ukraine.

DONETSK, Ukraine - Intense shelling rocked the area around the train station in the rebel stronghold of Donetsk in eastern Ukraine on Monday, an AFP reporter at the scene said.

Insurgent fighters had closed off the roads in the area on the edge of the city and terrified civilians were fleeing the fighting in minibuses and on foot.

A rebel fighter told AFP that government troops had attacked their positions close to the transport hub at around 10 am (0700 GMT).

"They came within about two kilometres of the station," insurgent gunman Volodya told AFP.

Local authorities warned residents in the area not to go outside or leave the confines of their homes and said the fighting had set a market ablaze close to the station.

Sporadic clashes have taken place around the separatist bastion as both sides have ignored calls for a ceasefire following Thursday's downing of Malaysia Airlines flight MH17 in rebel-held some 60 kilometres (40 miles) from Donetsk.

Ukrainian soldiers have maintained a foothold at the city's airport, close to the train station, since a fierce battle gutted the modern terminal building in May.