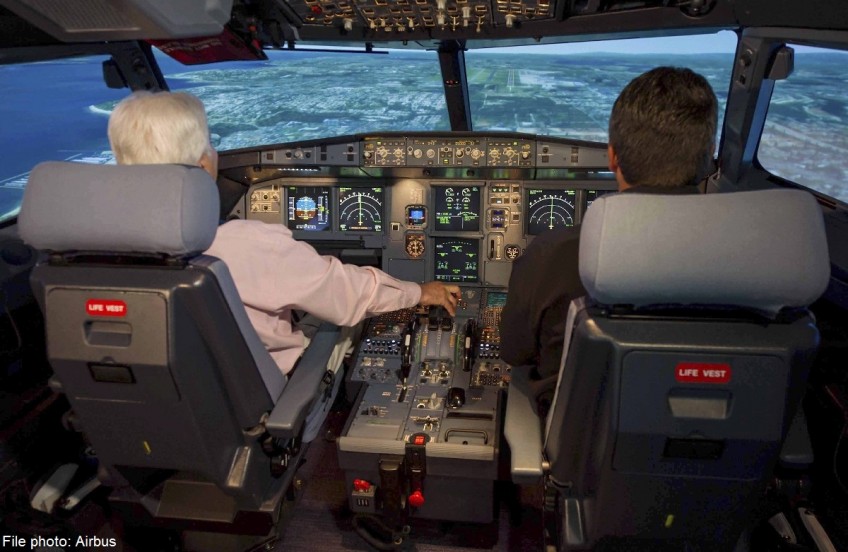 An undated handout picture isued by Airbus company of an interior view of a Airbus A320 cockpit simulator.

SEYNE-LES-ALPES, France - The young co-pilot of the doomed Germanwings flight deliberately crashed the plane into the French Alps after locking his captain out of the cockpit, but is not believed to be part of a terrorist plot, French officials said Thursday.

The 28-year-old co-pilot "deliberately" initiated the plane's descent, Marseille prosecutor Brice Robin told a press conference in which he revealed the details of recordings made by the Airbus' cockpit flight recorder in the final minutes before the crash that killed all 150 aboard.

"The co-pilot is alone at the controls," Robin said. "He voluntarily refused to open the door of the cockpit to the pilot and voluntarily began the descent of the plane." There was no immediate clue to the motive of the co-pilot, but investigators appeared to rule out terrorism.

"At this moment, there is no indication that this is an act of terrorism," Robin said, adding that the co-pilot, identified as Andreas Lubitz, had no known terrorist connection. "He was not known to us." Despite the horrifying scenario of a rogue co-pilot sending the Germanwings crew and passengers to their deaths, Robin said that the passengers on board probably were unaware "until the end".

"The screams aren't heard until the end," he said.

All six crew and 144 passengers died "instantly," he added.

The co-pilot, who deliberately set the controls "to accelerate the plane's descent" into the side of a mountain in a region famous for its ski resorts, "was conscious until the moment of impact," Robin said.

The shocking new information was released as families and friends of victims began arriving in France to travel to the remote mountainous crash site area, where locals have opened their doors in a show of solidarity with the grieving relatives.

Two planes arrived in southern France on Thursday from Barcelona and Duesseldorf with families and friends.

Tents were set up for them near the crash site area to give DNA samples to start the process of identifying the bodies of loved ones, at least 51 of whom were Spaniards and at least 72 Germans.

Meanwhile, the remains of victims, found scattered across the scree-covered slopes, were being taken by helicopter to nearby Seyne-les-Alpes, a source close to the investigation told AFP.

A mountain guide who got near the crash site said he was unable to make out recognisable body parts.

"It's incredible. An Airbus is enormous. When you arrive and there's nothing there... it's very shocking," said the guide, who did not wish to be identified.

The crash site, which is situated at about 1,500 metres (5,000 feet) altitude, is accessible only by helicopter or an arduous hike on foot.

French President Francois Hollande and German Chancellor Angela Merkel flew over the site to see the devastation for themselves Wednesday. Spain's Prime Minister Mariano Rajoy also visited a crisis centre near the scene.

It was the deadliest air crash on the French mainland since 1974 when a Turkish Airlines plane crashed, killing 346 people.

Lufthansa said the aircraft was carrying citizens of 18 countries. Three Americans and three Britons were confirmed among the victims.

Argentina, Australia, Belgium, Colombia, Denmark, Holland, Israel, Japan, Mexico and Morocco also had nationals on board, according to officials.

Investigators say that once the co-pilot locked himself in, he never talked again. After he sent the plane into its fatal last dive, ground control repeatedly tried make contact and the co-pilot did not answer.

"He had no reason not to talk to air control," Robin said, adding that they could hear him "breathe normally." "He didn't reply to a thing. He didn't say a word. In the cockpit, it was utter silence." A source close to the enquiry said an alarm indicating proximity to the ground could be heard before the moment of impact.

The dead on board flight 4U 9525 included two babies and 16 German school exchange pupils. They were flying from Barcelona to Duesseldorf.

A second black box, which records flight data, has not yet been recovered.

The New York Times cited a senior military official involved in the investigation as saying the cockpit black box recording indicated the pilot tried unsuccessfully to bash his way back in to the cockpit.

"The guy outside is knocking lightly on the door, and there is no answer," the investigator told the newspaper. "And then he hits the door stronger, and no answer. There is never an answer." He continued: "You can hear he is trying to smash the door down."