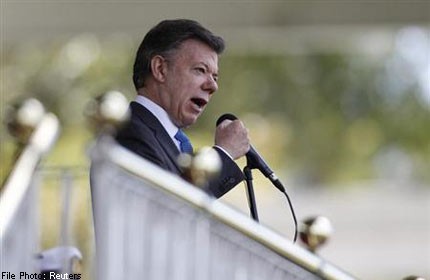 BOGOTA - Colombia's government and FARC rebels will resume peace talks on Monday, the chief government negotiator said, a day after both sides cast doubt on the process by suspending negotiations.

President Juan Manuel Santos will send his team back to talks hosted by Cuba after verifying that the FARC was prepared to head back to the negotiating table, former Vice President Humberto de la Calle said on Saturday.

"The president has instructed us on the decision to return tomorrow to Havana to continue talks on a search for an end to the conflict," de la Calle said, reading a prepared statement.

"It was carefully noted that the FARC had taken the decision to return on Monday at half past eight in the morning to the talks table to continue deliberations as normal."

Santos' decision on Friday to recall his team in Havana came after the FARC declared a pause in talks to study a government proposal on how to ratify a final peace accord. The suspension was a setback after nine months of difficult discussions.

While the walkout was short-lived, such interruptions may become more common as talks progress through the tough five-point agenda.

Under discussion now is the FARC's incorporation into the political system, one of the thorniest issues. Santos has said he wants talks concluded by the end of the year.

Both sides have much at stake. Santos has bet his political legacy on bringing peace to the Andean nation, while a military victory for the FARC rebels now looks less likely after a 10-year US-backed military offensive that slashed their numbers to about 8,000 from 17,000.

Colombians are desperate to see an end to the war that has killed more than 200,000 people and displaced millions since it began in 1964.

Santos is also eager to begin negotiating with the National Liberation Army, a smaller rebel group known as the ELN, to cement peace.

Santos called his negotiators back to Colombia on Friday after the FARC said hours earlier it would take time out to study the government´s draft bill that would require any peace deal with the guerrillas to be put to a popular vote.

The FARC, considered a terrorist organisation by the United States and European Union, has insisted a constituent assembly be formed and be charged with incorporating the content of the peace deals into the country´s constitution. The government has rejected that demand.

The two sides had determined in an initial agreement that led to the start of peace talks that they would decide together how to ratify an eventual peace deal.

Santos, who is widely expected to run for a second presidential term next year, said on Friday he accepted the FARC's right to study the referendum proposal for a short time, but later asserted the rebel leadership would not dictate any stoppages in the talks.

The government is still combating the nearly five-decade old guerrilla movement militarily, having refused to declare a ceasefire.

Thirteen soldiers were ambushed and killed by the FARC on Saturday in the oil-producing province of Arauca, the army said. In July, rebels killed 19 soldiers in two separate attacks. Most of them were protecting an oil pipeline in the country´s northeast.