Colombian mother and child among dead in Tunisia attack 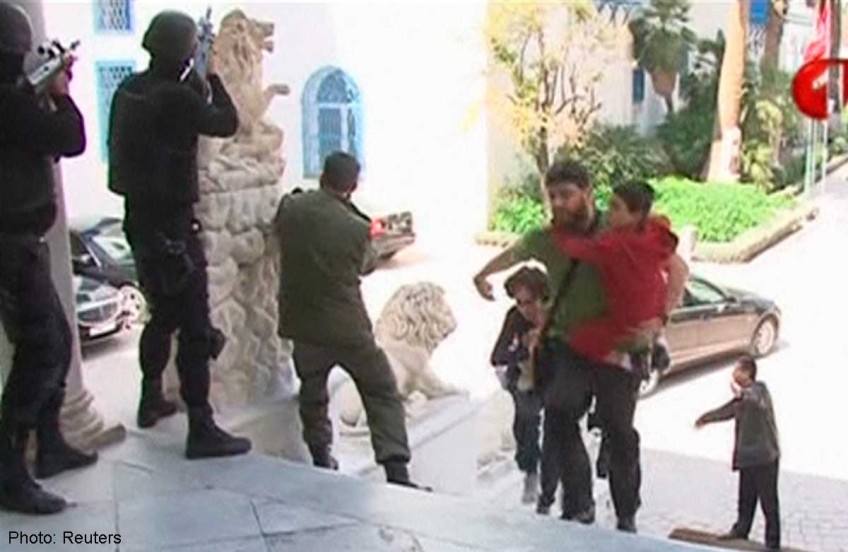 Tourists running for cover after gunmen attack tourists at a Tunisian museum.

PARIS - A Colombian mother and child on a family holiday were among 17 tourists killed in a gun attack in Tunisia, their government said as conflicting breakdowns of the casualties emerged from different national authorities.

The father of the Colombian family survived, the foreign ministry in Bogota said Wednesday, giving no further details.

Victims of the assault on the National Bardo Museum in the country's capital Tunis also included tourists from France, Spain, Japan, Australia, Italy and Poland, as well as two Tunisians.

The tolls given by individual countries differed at times from a detailed breakdown by Tunisia's Prime Minister Habib Essid.

He said that among the dead were five Japanese, four Italians, two Colombians and one each from Australia, Poland, France and Spain.

The nationality of a 16th victim was not given, while the identity of the final fatality had not yet been established.

However French President Francois Hollande said two French tourists had been killed, and at least seven were wounded, with one in serious condition.

Japanese Prime Minister Shinzo Abe said three Japanese nationals had been killed and three injured in what his government condemned as a "despicable act of terrorism".

The Italian foreign ministry gave a toll of three dead and six injured, and said the families of the victims had been notified.

Spanish Foreign Minister Jose Manuel Garcia-Margallo said two Spanish citizens had lost their lives in the attack, but did not say whether any Spaniards were injured.

He said the victims were part of a group of tourists who had disembarked from two cruise ships to visit Tunis. One of the ships had 60 Spanish nationals on board, the other 30.

"I can't rule out that there will be more dead or injured," the minister said at a press conference.

The British foreign ministry said two of its citizens were "caught up" in the attacks, but did not clarify whether they had been hurt.

Earlier, French Foreign Minister Laurent Fabius, speaking at a press conference in Paris alongside his Tunisian counterpart, had said six Frenchmen had been hurt in the attack, three of whom were "in a serious condition".

A Tunisian bus driver and a Tunisian policeman also lost their lives when gunmen stormed the museum.