Condoleezza Rice says she's 'had her fill of politics' 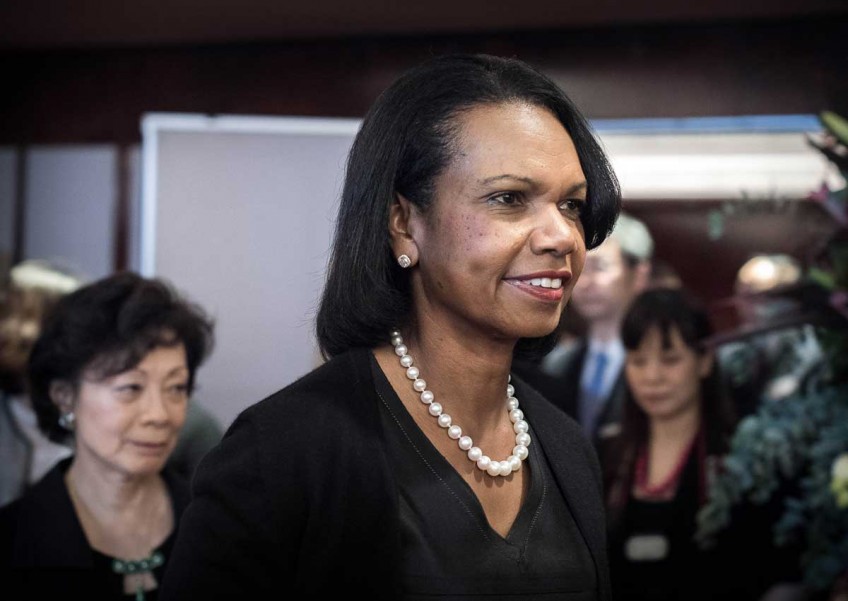 HONG KONG - Former US secretary of state Condoleezza Rice, who served under ex-president George W. Bush, said Thursday she is done with politics and is happy with her role as an educator.

Rice, 60, was the first female African-American to hold the post of the nation's top diplomat in Bush's second term from 2005 to 2009.

"I'm quite content to spend my life helping young people find themselves, I've had my fill of politics," she said at an event in Hong Kong.

Rice, who became a professor of political science at Stanford University in 2009, was speaking at the launch of a new broad-ranging prize set up by Hong Kong billionaire and casino magnate Lui Che-woo.

"One thing that education can do is it can provide us with an opportunity to understand one another better, and so while I've spent a lot of my time in the world of politics, I've always felt that it is really not politics that will solve this for us," she said.

"It's really our betterment of individuals and then the commitment of those individuals to a collective better life for humankind," Rice, a council member of the newly-established prize said.

The focus of the prize will change every year under the broad categories of sustainable development, welfare of mankind and the "promotion of positive life attitude", starting in 2016.

Also on Thursday, another Hong Kong-based prize with a broad theme focused on the betterment of mankind was to be awarded.

US astronomer William Borucki was one of five laureates of the latest edition of the Shaw Prize, founded by the late Hong Kong film producer and philanthropist Run Run Shaw.

Borucki was awarded the prestigious prize for leading NASA's Kepler Mission, which seeks out Earth-like planets that might be able to support life.