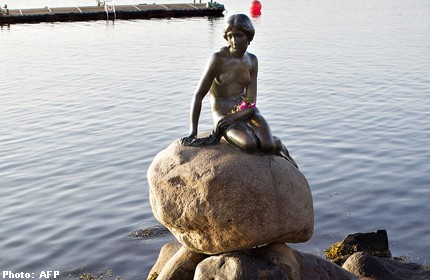 Perched on a rock in the water just off the star-shaped Kastellet fortress near the city's harbour, the small bronze-skinned sculpture has become a Danish icon on a par with Carlsberg, the brewery once owned by the man who financed it.

Today, millions of children know the Little Mermaid from the Disney movie and the merchandise it spawned, but the original story lacks the happy ending of the animated film.

In the Danish saga, the mermaid rescues a prince at sea and falls in love, giving up her aquatic life to be with him on land.

However, to turn her fishtail into legs, she has to give up her voice, and speechlessly she watches her prince marry someone else. In sorrow, she throws herself back into the ocean and turns into foam.

Born in the central city of Odense, Andersen's penchant for making the underdog the protagonist of his stories helped the tales spread around the world, said Per-Olof Mattsson, a lecturer at the Department of Literature and History of Ideas at Stockholm University.

"Andersen was a pioneer in creating an interest for fairytales, which were previously instructive, authoritarian and moralistic," Mattson said.

"He let the weakest steer the perspectives, with sympathy for the vulnerable," he added.

The mermaid, or Den lille havfrue, as she's known to the Danes, is still a major tourist attraction in the Danish capital.

The neat figure with the heartbroken gaze, unveiled a century ago on August 23, 1913, has become the symbol of the city of Copenhagen just like the Eiffel Tower has in Paris and Big Ben in London.

Earlier this week, visitors were jostling on the shore to get the best photo of the 100-year-old lady.

Cai Kewen, a Chinese tour guide, said she always brought visitors to the small statue at the Langelinje quay.

"Many people have read the stories by H.C. Andersen and want to see the Little Mermaid," said Cao, who has shown the 1.25-metre (4.1-feet) tall mermaid to sightseers for the last ten years.

"But visitors always ask me, 'Why is it so small?'. They believe it would be much larger."

Others praised its simplicity. "We loved it," said American Irmgard Alberts who had joined a canal cruise in the city. "The statue is so simple and well displayed."

The tale of the statue began in 1909, when brewer Carl Jacobsen, of the Carlsberg beer, saw ballerina Ellen Price perform the Little Mermaid at Copenhagen's Royal Theatre.

Jacobsen, an avid art collector, was so impressed by what he had seen that he commissioned artist Edvard Eriksen to create a sculpture of the mermaid as a gift to the city.

Since then the mermaid's storied life on land has included meetings with vandals and a trip abroad.

In 1964, her head was stolen and a new one had to be made for her. She lost her arm in 1984 and was decapitated a second time in 1998, but this time the culprits seemingly had a change of heart and returned the loot anonymously.

She has also had paint poured over her several times, been pushed into the water and was even dressed in a burka in 2004 to protest plans for Turkey to join the EU.

Denmark's most popular centenarian saw the world with her own eyes in 2010 after crossing the seas to be part of the Danish pavilion at the Shanghai World Expo.

During her time away, Chinese artist Ai Weiwei exhibited a multimedia installation at the Copenhagen site.

But for her birthday, the Little Mermaid was back in the spotlight, and still bringing in the crowds.

One hundred live mermaids were also due to swim in the water around her, forming the number 100.