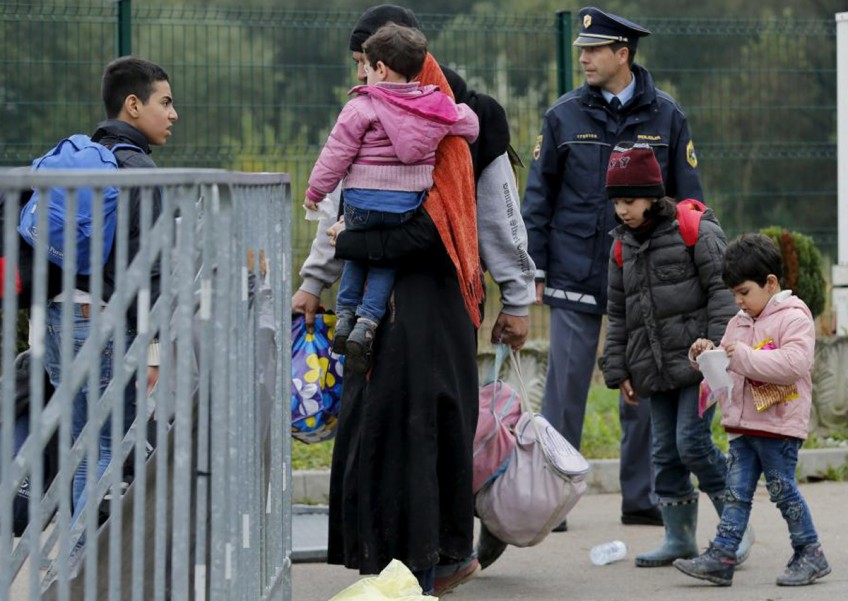 A migrant family walks to a registration center at a Croatia-Slovenia border crossing in Lendava, Slovenia October 17, 2015.
Reuters

A first bus full of migrants arrived at a Slovenian border crossing with Croatia on Saturday, the Slovenian police said, after Hungary shut its border with Croatia late on Friday, diverting them towards Slovenia.

Hungary's action to close its southern border is indicative of Europe's disjointed response to the flow of people fleeing war and poverty.

Slovenian police said the bus had arrived at a border crossing from Croatia and that the passengers would be registered.

But Slovenia has cancelled all rail traffic with fellow European Union member and former Yugoslav republic Croatia, potentially slowing the movement of people just as autumn winds and rain are sweeping through the Balkans.

Forty-three buses packed with migrants, many of them refugees from the war in Syria, were stacked up at Serbia's western border with Croatia in the village of Berkasovo, a Reuters reporter said. Croatia had only allowed five buses to enter in the morning and some had been queuing through the night.

Hungary has erected a steel fence almost the length of its southern frontier with Serbia and Croatia, saying it is duty-bound to secure the borders of the European Union from mainly Muslim migrants threatening, it says, the prosperity, security and "Christian values" of Europe.

Budapest is among several ex-Communist members of the EU that oppose an EU plan to share out 120,000 refugees among its members. That is only a small proportion of the 700,000 migrants expected to reach Europe's shores by boat and dinghy from North Africa and Turkey this year, many of them fleeing war and poverty in the Middle East, Africa and Asia.

At a summit in Brussels on Thursday, the EU offered Turkey a possible three billion euros ($3.4 billion) in aid and the prospect of easier travel visas and "re-energised" talks on joining the bloc if it would help stem the flow of migrants across its territory.

But Hungary said this fell short of Budapest's demands, which include formation of a common force to protect the borders of Greece, where most migrants arrive across the Aegean from Turkey before heading north through Macedonia and Serbia.

Slovenia, a small country of two million people, says it can accommodate up to 8,000 migrants per day before they continue their journey west to Austria and Germany, the chosen destination for the vast majority.

"The bus is on the border crossing (Gruskovje) and the migrants will now go through a registration process," police spokesman Bojan Kitel said of the first bus to arrive on Saturday after Hungary's border closure.

Slovenia and Croatia said on Friday they would not restrict the flow so long as Austria and Germany keep their doors open.

Slovenia said it was in talks with Croatia possibly to direct the flow of migrants through only two border crossings. Slovenia's national security council was due to meet later on Saturday.

The police told Reuters migrants are expected to enter Slovenia on Saturday through border crossings Gruskovje and Petisovci, which are both located in eastern Slovenia, not far from the border with Hungary.