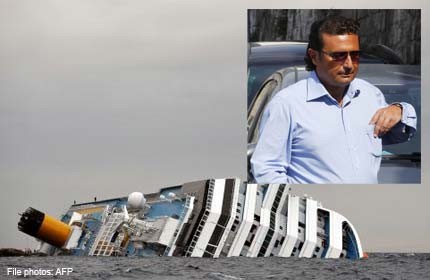 GROSSETO, Italy - The captain of the Costa Concordia cruise ship requested a plea bargain deal at his trial in Italy on Wednesday over a shipwreck that claimed 32 lives.

Francesco Schettino's lawyers asked that their client serve three years and five months in prison in exchange for admitting responsibility for the disaster.

Dubbed "Italy's most hated man" by the tabloids, Schettino is accused of multiple manslaughter, abandoning ship and causing environmental damage for the disaster off the island of Giglio.

The plea bargain is seen as unlikely to be accepted since a previous request has already been turned down by a judge for preliminary investigations.

Chief prosecutor Francesco Verusio brushed off the request and told reporters there was "no doubt" of Schettino's guilt and the only question was "how long a sentence he will get".

Survivors of the January 2012 tragedy said they were still haunted by the memories of that night and wanted the trial to finally shed light on what exactly went wrong.

"We're here today to get justice," Francesco Di Ciollo, a lawyer representing two Italian families, said at the hearing in Grosseto - the city nearest to the crash site in an idyllic spot on the Tuscan coast.

"Survivors have to live with anxiety for the rest of their lives. There was darkness, panic, they were stranded inside without a way out," he said.

The trial began last week but was immediately postponed after Schettino's defenders adhered to a national lawyers' strike and could last for months.

"No-one helped us," said Gianluca Gabrielli, a 33-year-old survivor from Rome who was on the cruise with his wife and two children, now five and six.

"The children do not want to fly or take a boat since it happened. They are traumatized. The older remembers it well, he had nightmares for months," Gabrielli said.

"I'm not angry at Schettino, I'm angry at the system," explaining that crew members failed to help him and his family during the panicky abandonment of the ship in a cold winter night.

Schettino was nicknamed "Captain Coward" for leaving while terrified people were trapped aboard and then sobbing in the arms of the ship's chaplain.

He has defended himself saying the ship was at a near 90 degree angle and he fell onto a lifeboat.

Some lawyers have been arguing he should not be the sole defendant and Costa Crociere, Europe's biggest cruise operator, should share the blame.

Massimiliano Gabrielli, a lawyer for some survivors who are suing for compensation, accused Costa of "choosing to save the ship instead of saving people".

He said the trial could last more than a year, while prosecutors said it should be completed by early 2014.

Five other people have been charged over the disaster, including the ship's Indonesian helmsman and the head of Costa Crociere's crisis unit.

The five have negotiated plea bargains with short prison sentences which are due to be ruled on at a separate hearing on Saturday.

The prosecution says it wants to call Domnica Cemortan, a young Moldovan woman who was in Schettino's company at the time of impact, as a witness.

"I'm disappointed there is only one person being held responsible. This is not a car accident, it's a ship accident," Cemortan, who has applied to be a plaintiff in the case, told reporters.

The trial is being held in an improvised courtroom in a theatre in Grosseto because of the large numbers expected, with the panel of judges seated on the stage.

The 290-metre (951-foot) ship still lies beached on its side, its rusting frame dwarfed by blue cranes and a floating hotel for divers and salvage workers.

The vessel is due to be righted in September but officials are concerned that its submerged side may be more damaged than previously thought.

Giglio's mayor Sergio Ortelli told AFP that nerves on the island were strained.

"The patience of the inhabitants has been stretched to the limit," he said.