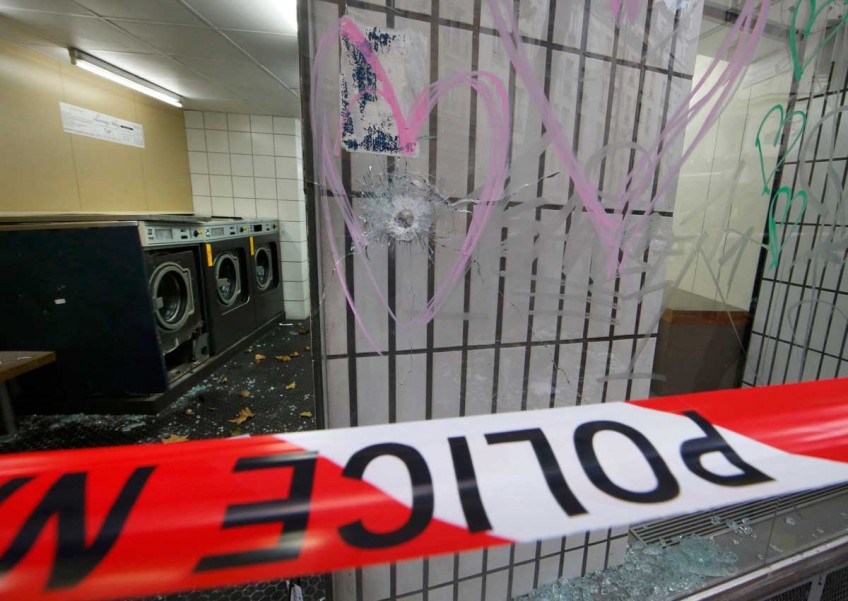 Bullet impacts are seen in the window of a laundromat near the Le Carillon restaurant, one of the attack sites in Paris.
Reuters

Paris - France staged dozens of raids on suspected extremists on Monday and bombed the Islamic State group in Syria as the prime minister steeled the nation for more bloodshed after its deadliest ever terror attacks.

A traumatised nation stopped for a minute's silence at midday (1100 GMT) to honour at least 129 people killed in the unprecedented assault on Paris nightspots.

Thousands paused in the capital's streets and President Francois Hollande observed the silence at the Sorbonne University, in recognition of the large number of young victims.

Hiding the tears behind dark glasses, 63-year-old Chantal said in a trembling voice: "It really hurts, all this youth cut down."

"I don't know anyone but at the same time, they were all our children," she said, adding it was important to go out into the streets for the minute's silence "to show we aren't scared."

Investigators identified two more attackers involved in the attack, including a Frenchman previously charged in a "terrorist" case and a suicide bomber found with a Syrian passport, although the authenticity of the document still needs to be verified.

Police conducted "several dozen" raids across France while Belgian police launched a new operation in a radical hotspot in the increasingly international probe.

In the southeastern French city of Lyon, police found "an arsenal of weapons," including a rocket launcher and Kalashnikov assault rifle.

As authorities scrambled to find those responsible, the grieving French tried to return to the humdrum of daily life.

Shrines that have sprung up at the attacked Bataclan concert hall and restaurants were surrounded by silent mourners bathed in flickering candle light into the early hours of the morning.

"We need to understand how this barbarism can exist and why France is paying this heavy price," said David Boy, 52, his lips trembling as he lingered at one of the memorials on the way to work.

Metro trains were packed with commuters, pupils returned to schools and museums opened, although a national state of emergency remained in place.

"We know that operations were being prepared and are still being prepared, not only against France but other European countries too," he told RTL radio.

Late on Sunday, French planes took off from the Gulf to bomb the stronghold of the Islamic State jihadists, who claimed responsibility for Friday's carnage in Paris.

French jets hit an IS command post, a recruitment centre, a munitions depot and a "terrorist" training camp in Raqa and more raids were reported on Monday.

Much of the investigation's focus has swung to Belgium. French Interior Minister Bernard Cazeneuve said the attacks were "prepared abroad and involved a team situated on Belgian territory and who may have benefited from... complicity in France."

Three brothers are believed to be involved in the attacks, one who was arrested, one who blew himself up, while police have released a photograph of the third, 26-year-old Salah Abdeslam, who is thought to be on the run.

The brothers lived in Brussels, in the rundown immigrant neighbourhood of Molenbeek, where police have made several arrests.

A major new operation was launched Monday in the suburb which has a reputation as a hotbed of Islamic militancy.

Five of seven known attackers in France have been identified, but it is unclear if other gunmen involved fled after the attacks which are believed to have been carried out by three teams.

Two of the gunmen involved in the worst carnage of 89 killed at the Bataclan theatre have been identified as 29-year-old Paris native Omar Ismail Mostefai and 28-year-old Samy Amimour.

A Turkish official said police there had twice warned France about Mostefai.

Amimour was charged in 2012 for "conspiracy to commit terrorism" over a planned attack in Yemen that was foiled.

He violated his judicial supervision in 2013, prompting judges to issue an international arrest warrant.

His family told AFP, in an interview before Friday's attacks in Paris took place, that he had gone to Syria in 2013.

An attacker at the Stade de France national stadium where three blew themselves up outside the stadium during a match, was carrying a Syrian passport in the name of Ahmad Al Mohammad, although authorities said the authenticity of the document had yet to be verified.

His fingerprints matched those taken in Greece in October, raising fears that some of the assailants might have entered Europe as part of the huge influx of people fleeing Syria's civil war.

A litany of attacks and foiled attacks have followed - a man who beheaded his boss, another who was overpowered as he opened fire on a high-speed train - highlighting how France has become a major target of jihadists.

IS claimed it had attacked Paris in revenge for the French campaign of air strikes in Syria and threatened further violence in France "as long as it continues its Crusader campaign".